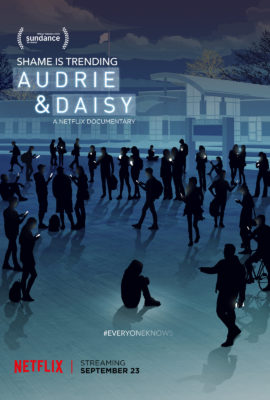 From the press release: Audrie & Daisy is an urgent real-life drama that examines the ripple effects on families, friends, schools and communities when two underage young women find that sexual crimes against them have been caught on camera.

Audrie & Daisy is an urgent real-life drama that examines the ripple effects on families, friends, schools and communities when two underage young women find that sexual crimes against them have been caught on camera. From acclaimed filmmakers Bonni Cohen and Jon Shenk (The Island President, The Rape of Europa), Audrie & Daisy – which made its world premiere at the 2016 Sundance Film Festival – takes a hard look at America’s teenagers who are coming of age in this new world of social media bullying, spun wildly out of control.

By highlighting the stories of these girls, their families and friends, Audrie & Daisy brings into focus issues of truth, power, memory and trauma. With a legal system that cannot successfully prosecute these cases, the film explores the pursuit of justice against the backdrop of adverse social media and local community forces who don’t want to believe that this can happen in their own towns.

About Netflix:
Netflix is the world’s leading Internet television network with over 83 million members in over 190 countries enjoying more than 125 million hours of TV shows and movies per day, including original series, documentaries and feature films. Members can watch as much as they want, anytime, anywhere, on nearly any Internet-connected screen. Members can play, pause and resume watching, all without commercials or commitments.