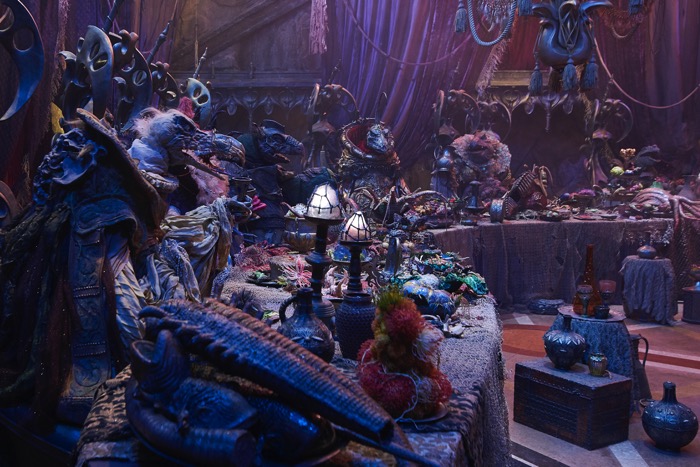 One thing I always say, especially as a critic is, we all have a bias and anyone who says they don’t is lying. We all have things and genres we like and dislike. If something is good it’s good and if something is great then it’s great. I’m someone who hates Puppets and puppet related films. With that said, Team America World Police is one of my favorite movies and I adore The Muppets. Due to my general dislike of puppets, I’ve never sat down and watched the cult classic – The Dark Crystal, created by the legendary creator of the Muppets Jim Henson. Netflix’s The Dark Crystal: The Age of Resistance was a revelation and eye opener for me.

Don’t worry if you’ve never seen the film, this brilliantly realized world had me hooked by the end of the first episode and that’s saying something. As it usually takes 3 or 4 episodes for Netflix shows to suck me in. I’m not saying I understood what the heck was going on at first but the production was a sight to behold. The amount of craftsmanship that went into creating this is stunning. It’s blend of CGI with practical affects and puppetry was so seamless that I didn’t even know they used CGI until I saw a making of featurette.

Show runners Jeffrey Addis best known for Superstore and Parks and Rec and his partner Will Matthews – a comedy actor is the unlikely duo behind reviving this beloved story, of course with the full support of the films at Jim Henson Productions.

The puppetry work was absolutely stellar. While I never believed these were “real” people, that wasn’t the point. I completely bought into this world and the complex mythos that was built. The tone and pacing were on point. Just when things looked dire there would be a bit of humor to lighten things up just when things got bleak at some points. I don’t know what I expected I turned this on, but was amazed at how realized this world was. Now I don’t know how much of the various lands were covered in the movie, but this was epic fantasy story telling at its best.

Right from the ending of the first episode you know this is going to be a pretty dark and at times graphic story. Not graphic in the sense of Team America: World Police, but certainly in tone. I’m trying to avoid spoilers, but I would say don’t get too attached to any specific characters. There are a lot of deaths in this 10-episode series. And again, these are puppets so it was surprising how attached I was to each of these characters.

There’s a world called Thra that was inhabited by a race of elfin like people called Gelflings who are made up of 7 very distinct clans who each have their own cultures and prejudices against each other. The clans are ruled by one ruling family and leader “of all” is called the All Maudra (Louise Gold ) who is essentially the queen of all the clans. At the beginning of time there was a something called The Crystal of Truth that was entrusted to the Aughra (Donna Kimball ) who is some sort of great sage or mother of Thra.

She entrusts the crystal to the care of a group of beings called Skesis. The Skesis abuse the political and physical power the Crystal gives them and use their control of it to establish themselves as “benevolent” rulers who enslave the Geflings. The Skesis are so masterful that the Geflings don’t know they are enslaved. While on an adventure young palace soldier Rian (Taron Egerton ) discovers the Skesis deceit in the worst way possible and is forced on the run by the Skesis Emperor (Jason Isaacs ).

I was struck by how much this story liberally borrows from Lord of the Rings. From the seven clans to the idea that The Crystal of Truth was very similar to the ring of power and how it becomes an instrument that spreads the “darkening” throughout the land of Thra and Rian’s quest to show the world the truth.

Along the way he even forms his own “fellowship” of companions – too many to name in this review, but one of the main companions is Deet (Nathalie Emmanuel ) from an underground Gefling clan that was sent on her own quest. We also meet Princess Brea (Anya Taylor-Joy ) who eventually joins up with Rian.

Meanwhile on the Skesis side we have an amazing group of voice actors headed up by again, the aforementioned Jason Isaacs as the Emperor, the great Simon Pegg as the wonderfully manipulative Chamberlain and Olly Taylor as the evil Scientist. Or as he says, “He’s no more than a Gefling who eats a bug.” This was one of my favorite moments in the entire season was when The Scientist proves he could be just as smart and calculating as Chamberlain. Only he honestly believes in what he’s doing and that’s just as frightening as Chamberlain’s political maneuverings.

The voice cast assembled from this series is astounding and one of the brilliant things about it is that while they cast a bunch of well known actors, mostly British, their voices aren’t as distinctive, so there was never an instance where I was like “Oh, that’s just Chris Rock, being Chris Rock.”

This is a rare show that crosses multiple genres and has high fantasy, real human moments, along with political intrigue and modern social commentary embedded throughout all while never blatantly obvious to some of it’s subtle preaching. A must watch for fans of humanistic fantasy.

It does take a few episodes to figure out the cast of “thousands,” but it is a wonderfully wild ride. I will say, my only minor complaint is I hated the cliff hanger ending. I like closure.

All 10 episodes are streaming now.