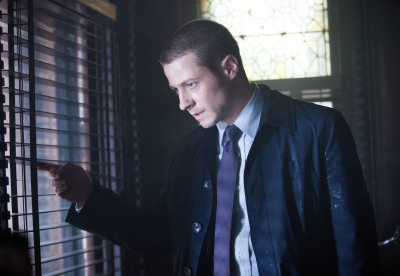 Last week we saw Gotham’s first vigilante the Balloonman make an appearance and Bruce realizes that killing the bad guys isn’t the way. The week’s episode kicks off right where last week’s ended with freaky Cobblepot showing up on Gordon’s doorstep.

He tells Barbara his name is Peter Humboldt. Arkham is going to play big part in the upcoming war and the future of Gotham and he wants to be Gordon’s spy.  A mystery man kills a councilman and his aid in a most gruesome way.  This is an 8:00 show? Guess kids hour doesn’t exist in Fox World. 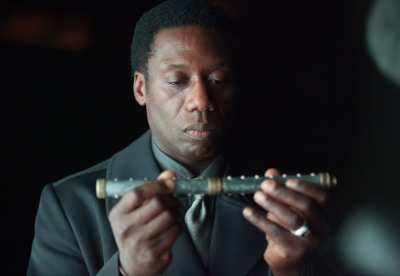 Gordon and Bullock get the case. He assumes its a hit, but Bullock tells Gordon that no one kills Councilmen because it’s cheaper to bribe them. Besides you kill him, another one with their hand out will just take his place. Ok, I hate JPS, she’s too over the top and I’m ready for her to get iced. Fish is auditioning a new girl that she can eventually use as a weapon. 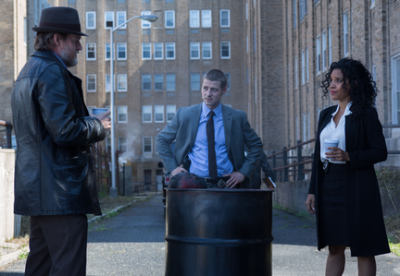 Turns out the idea for Arkham came from the Waynes and the Mayor is using their death to rally support behind the plan. Gordon goes to Alfred to find out what the Wayne plan is, he tells him, it’s the Wayne plan in name only and that Falcone is the primary backer of it now. So we are to assume that the Mayor is in Falcone’s pocket.

Alfred says the Councilman was backing Falcone’s plan, so he was probably killed by Maroni who wants to take the Arkham land and use it for development – knowing what we all know, we should be rooting for Maroni. The show is trying to develop this deep political intrigue around the Arkham conflict but we already know which side wins. This is why prequels generally suck. There’s no suspense. 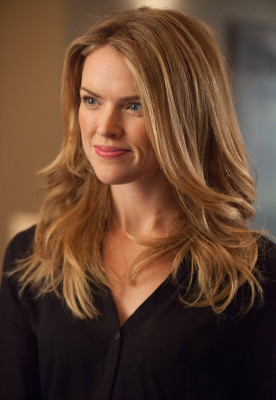 Bruce asks Gordon if the battle over Arkham could be why his parents were killed. One of the Councilmen in Maroni’s pocket is killed in a most gruesome way. Again, for an 8:00 show it’s pretty gruesome.

Just when everyone thinks Gordon is right, Nygma tells the detectives that both Councilmen were killed by the same guy which rules out Falcone and Maroni going after each other. There’s a mysterious 3rd party behind the killings. Maybe its a time traveling Joker. Cobblepot gets caught snooping by the restaurant manager. You just know his time is short.

It always amazes me how tv and movie cops know just the right snitch for any given situation. Gordon and Bullock discover Richard Gladwell (guest star Hakeem Kae-Kazim) is the guy doing all the killing. See this is what happens when you are dumb enough to use a unique, signature weapon in all your crimes. Yeah, a fancy spike is cool, but it makes it easy to track you down.

The restaurant Cobblepot works gets robbed, everyone but Cobblepot was killed. Kind of convenient, either the man is a lucky son of a b. or he planned the entire thing. Barbara confronts Gordon about Cobblepot. He realizes Montoya came to see Barbara and he wonders what the deal is. Barbara admits that she had a relationship with Montoya. Maroni assumes Falcone is the one who hit him. He rewards Cobblepot by making him manager. 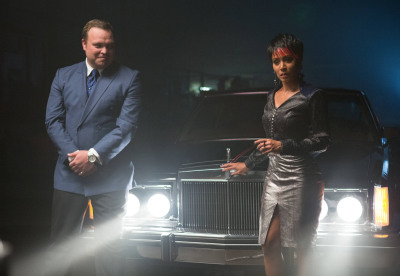 The Detectives discover that the real Gladwell is dead. Fish finds a new girl, Liza, to take under her wing and tells her to seduce her. This girl looks like a poor man’s Selena Gomez. Bullock goes to Fish for help. Cobblepot tells Gordon another hit is going to happen.

Gordon’s power seems to be super human deductive ability based on little to nothing, he miraculously figures out that the Mayor is the next target. It’s a major leap that isn’t clearly explained in the show.  Big battle happens at the Mayor’s house and once again Gordon and Bullock kill the suspect.

Barbara gives Gordon an ultimatum. Fish has the two girls fight it out. Episode ends with the revelation that, yep, Cobblepot was behind the restaurant hit and of course he kills his hitmen. What the heck? The Mayor brokered a compromise that saw both Falcone and Maroni get what they wanted out of the Arkham deal.

Ok, we’re four episodes in. I’m still enjoying Gotham, but it’s starting to feel like they don’t quite have a long term plan for the show. It is refreshing to watch a show that has stand alone episodes, but I just want more. What that more is, I don’t know. I don’t want a long, involved mythology built up. We all know Batman’s world, but the procedural aspects of the show needs to be tightened up and the show spends way too much time on Fish Mooney. Can we have one episode where Bullock doesn’t go to her for information?

I’m loving all the stuff with Cobblepot and I’m surprised by how much I really like young Bruce. Its fun watching him investigate his parents death, but at some point he has to do something and interact with people. He can’t just be locked away in his mansion, reading files for the entire season. It’s obvious what the last shot of the first season is going to be. This is the problem with making him so young. It would have been better if the show started off with everyone in their teen years, there would be more places they could take these younger characters.