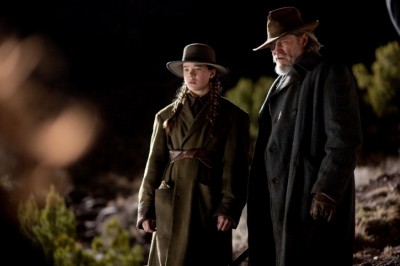 Charles Portis’ novel, True Grit, is a darkly seriocomic western that satirizes the genre’s conventions by formalizing them to the point of absurdity. It makes sense that the Coen Brothers, who have a similar sensibility, would adapt the novel in a faithful, yet strikingly Coen way.

Maddie Ross [Hailie Steinfeld] is fourteen years old, but she is nobody’s fool. In Fort Smith, Arkansas to take care of her late father’s affairs – and to seek vengeance on his killer, Tom Chaney [Josh Brolin] – she quickly disposes of the details: identify her father’s remains; get him sent home to Yell County; proceeds to out horse trade a horse trader and seeks out the meanest of the territory’s U. S. Marshall’s, one Rooster Cogburn [Jeff Bridges] to hire to track down her father’s murderer. Only a Marshall would dare track him now that he’s fled into Indian country.

Early on we’re shown that this western is aware of the realities of life in those times – the morning before Maddie tracks down Cogburn, she witnesses a multiple hanging. It is an even that is attended by most of the townspeople. Now that’s entertainment!

She decides to hire Cogburn after seeing him give testimony in the trial of the last remaining member of a family he’s mostly killed already. There can be no doubting his determination to do his job. He has, as she puts it, ‘true grit.’ Of course, there’s a different side to Cogburn than what she saw at the trial. That fella was something of a put on; in reality, Cogburn is a fat, slovenly drunk. It takes little effort for her to enlist his aid – he’s just not capable of shutting her out, and her offer of ‘cash money’ if he takes the job is very enticing.

Shortly after Maddie hires Cogburn, she meets a Texas Ranger named LaBoeuf [Matt Damon] – he pronounces it LaBeef] – at the boarding house where she has to share a bed with an old woman called Grandma Turner [who snores and steals the blankets]. LaBeef is after her father’s killer, too. Seems he killed a senator in Texas and there’s substantial reward that LaBeef has spent four months trying to claim.

When Maddie rebuffs his overtures to team up with her and Cogburn, he goes behind her back and works deal with him. This displeases Maddie because Chaney their deal would have Chaney going back to Texas to be tried – and she wants him to know he’s dying for killing Frank Ross. She is even more displeased when the two set off without her, but they have underestimated her and don’t get far before she catches up, crossing a river on horseback to do so.

Ethan and Joel Coen have adapted the novel in a way that allows for Portis’ outrageously elegant language to survive, for the most part, intact. Cogburn hides much behind his elegant language, just as Maddie uses equally formal locution to make transparent her determination to see Chaney dead. LaBeef is a buffoonish figure in the novel and, again, it’s largely because of the way he speaks.

Through Roger Deacons, whose cinematography reminds of John Ford [though a muted Ford], the Coen take Maddie, Cogburn and LaBeef [at least until he decides enough is enough and departs] on a journey through vistas that could be called panoramic, if bleak. True Grit is not just fraught with barely controlled emotion, unusual and intricate dialogue and moments of explosive violence [it is a Coen Brothers movie, after all], it is beautiful to look at.

Bridges plays Cogburn with a bit of John Wayne’s swagger [The Duke won his only Oscar® for the role in the 1969 film] and contrast bits of The Dude’s mellow [I doubt he’ll ever do another role without there being a trace of The Big Lebowski in it somewhere], but mostly he’s a mean-spirited old duck who hides the certain fear that way of life is vanishing behind a grandiloquent turn of phrase.

Damon’s LaBeef is both more subtle and less restrained than Glen Campbell’s version. In his case, language hides his lack of forethought and bluster doesn’t quite cover his lack of confidence in everything except his ability to hit a target at extreme range with his Sharps rifle. Under a tall hat and a bushy mustache, Damon disappears into the role and the result provides some of the best humor in the film.

Steinfeld, though, is a revelation. She handles the absurdly formal language as though born to it – and manages to convey a wide range of emotion while seemingly remaining stoic. Her Maddie, as in the novel, is pretty much humorless and yet, unintentionally provides a fair bit of laughter. Steinfeld never once lets us think she’s in on those jokes, either.

It might seem odd that the Coen Brothers would adapt any novel for the big screen – let alone a western. It might seem that their doing a PG-13 film is a sign of the apocalypse. Once you see True Grit, though, you’ll see that it fits perfectly into their style: it’s a dark, twisty, deeply satirical work that masquerades as a straightforward family-friendly adventure and traditional western. I wouldn’t have expected it, but True Grit is one of the best films of the year.