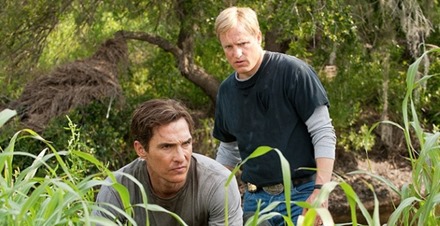 The tag for night’s episode of True Detective (HBO, Sundays, 9/8C) – Hart and Cohle forge a truce to probe a murky string of disappearances that tie to the symbology of the Dora Lange murder and the Tuttle family – is accurate, but definitely an understatement.

In After You’ve Gone, Marty (Woody Harrelson) and Rust Matthew McConaughey) do forge a truce to take care of some unfinished business but, as Marty confides to Maggie (Michelle Monaghan), ‘It took some convincing.’ He may even be underselling the situation.

True Detective’s penultimate episode opens with Marty and Rust having a beer in the bar where Rust works when he’s not pursuing the case. Despite Rust’s insistence that the two men have to finish what they started, Marty’s not having any of it – so Rust shows him the storage unit we’ve heard mentioned before. There, Marty sees what could be interpreted as a wall of crazy. But Rust has one last card to play – the card that convinces Marty to help him.

Flashbacks take us to an interesting encounter that gives Rust even more reason to believe he’s on the right track, and illegal actions on Rust’s part. Since Marty is no longer a cop, and since Rust’s actions provide a compelling reason for them to work together, he makes a key decision. Which leads, more or less, directly to Marty’s visit to Maggie.

Writer Nic Pizzolatto and director Cary Joji Fukunaga maintain the deliberate, implacable pace that that has allowed them to build up gravity and suspense. They keep the revelations coming, too – we learn why Marty left the police department and see Maggie in a brand new environment. New subjects give Marty and Rust more important information, and a key new character gets taken for a ride.

Outwardly, Marty in the present has seemed much like Marty in the past – but where his ‘people person’ bonhomie was at least partly a defensive mechanism behind which he could hide in the past, he seems much more relaxed and comfortable in his own skin in the present. Rust, on the other hand, seems to have hardly changed at all, despite his well-worn appearance – except for seeming a bit more haunted. In After You’ve Gone, this is clearer than ever.

Interestingly, we barely see anything of Detectives Papania (Tory Kittles) and Gilbough (Michael Potts) – though when we do, we witness what can probably be described as the biggest reveal of the series, so far.

The closing credits run over a Townes Van Zandt song, Lungs, that fits the somewhat melancholy atmosphere of the series and, especially, this episode. It’s a song about dreams unfulfilled and the ephemeral nature of life – in a way, much like Rust’s philosophy set to music Marty would love. It underscores their need to finish what they started – a choice that could, conceivably, lead to a bad end.

Next week, True Detective will conclude and once you finish watching After You’ve Gone, I will wager that, like me, you will move heaven and earth to not miss that.