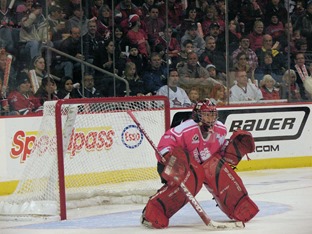 To Russia With Love is documentary that explores LGBT rights through the lives and experiences of gay athletes – and these are not just any old athletes. We’re talking Olympic medalists – Billie Jean King, Mark Tewksbury, Greg Louganis, Charline Labonté (above) – the best of the best. Also included are notable figures in and out side of the sports community – figures like Calgary Flames President of Hockey Operations and USA Hockey personnel director Brian Burke, Russian Open Games’ Konstantin Yablotsky and Elvina Yuvakaeva, David Remnick, editor-in-chief-of The New Yorker, actor/activist Stephen Fry and the Brooklyn Nets’ Jason Collins.

To Russia With Love was shot in cities around the world,  from Sochi, New York City, Calgary, Toronto, St. Petersburg and Moscow and our guide on this journey will be the colorful athlete and commentator, Johnny Weir. It premieres on EPIX on Wednesday, October 22nd. For more details, check out the press release after the jump.

New York, NY, JULY 8, 2014 – Premium entertainment network EPIX announced today that To Russia With Love, an EPIX Original Documentary about two generations of Olympic LGBT athletes, will make its World Premiere Wednesday, October 22 at 8PM ET.  To Russia with Love examines human rights through the lens of LGBT athletes, with iconoclastic athlete and commentator Johnny Weir serving as the viewers’ guide into this world.  The documentary examines the experiences of Olympic legends Billie Jean King and Greg Louganis as well as the next generation of LGBT athletes who participated in the 2014 Olympic Games in Sochi, Russia.  Shooting worldwide in locations as diverse as Sochi, New York City, Calgary, Toronto, St. Petersburg and Moscow, the film follows these athletes from the ice to the slopes as they bear the brunt of constant media questioning about Russia’s anti-gay laws.

“As gay athletes’ fight for equality continues to gain momentum, EPIX is proud to provide a platform for this important global conversation,” said EPIX President and CEO Mark Greenberg.

EPIX is a premium movie and original programming entertainment service delivering the latest movie releases, classic film franchises, original documentaries, comedy and music events on TV, on demand, online and on devices.   Launched in October 2009, EPIX has pioneered the development and proliferation of “TV Everywhere.”  It was the first premium network to provide multi-platform access to its content online at EPIX.com and was the first premium network to launch on Xbox, PlayStation®, Android tablets and phones, Windows 8.1 and Roku® players.  EPIX is available to authenticated subscribers on hundreds of devices including Apple® iPads® and iPhones® and is the only premium service providing all its programming  on all platforms, delivering more movies than any other premium network, with thousands of titles available for streaming.