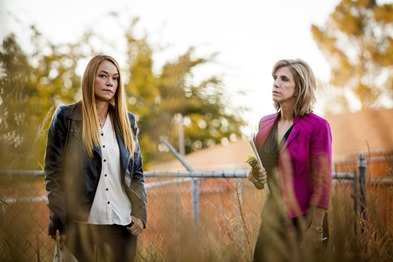 Just as America’s Most Wanted developed a reputation for finding fugitives from justice, TNT’s Cold Justice is getting a reputation for cracking cold cases and finding justice for victims of unsolved homicides. That’s no doubt part of the reason that the show has grown its audience which, in turn, has led TNT to greenlight the show for a third season.

Follow the jump for further details – and a pre-second season Q&A with Kelly & Yolanda.

TNT is ready to crack more unsolved cases as it orders a third season of its fascinating real-life crime series Cold Justice. The series, which recently reached the middle of its second season, has become a Friday night hit for TNT, delivering strong demo growth compared to season one. TNT’s renewal includes 10 episodes slated for the series’ third season. Season 2 of Cold Justice is currently airing Fridays at 9 p.m. (ET/PT). Season three is slated for early 2015 and will feature both new states and types of cases never seen on the show before.

Cold Justice follows former prosecutor Kelly Siegler and former crime-scene investigator Yolanda McClary as they travel to small towns around the country in order to look into murder cases that have lingered for years without answers or closure. Since the premiere of Cold Justice last September, Siegler and McClary have assisted local law enforcement in securing a total of 15 arrests, eight criminal indictments, four confessions, two guilty pleas and a 22-year prison sentence.

As they prepared for this summer’s episodes of Cold Justice, Kelly Siegler and Yolanda McClary answered a few questions about the show and what it means to be able to close cold cases.

Why are you so passionate about this show and the cases you investigate?

Kelly: I’m most passionate about the idea that one day, we can knock on the door of a victim’s family and tell them that the case has been reopened, and with all the resources thrown at it, we’ve been able to solve it. To see that look in their eyes, to see how they feel about that, is a wonderful satisfaction.

What is it that draws you to want to work on these cold cases?

Yolanda: Cold cases are very challenging. Cases where you have the fingerprints, you have the DNA, they’re kind of gimmes. They’re a lot easier for DA’s to walk in and prosecute, and they’re easier for your jury to understand. But, in cold cases, you have to try to figure out the crime scenes and what’s happened in there, the events and the sequences that occurred. That serves as a basis when you talk to potential suspects. So it’s all a big challenge.

What is it like working with small town police departments?

Kelly: Working with all these officers and deputies from little towns all across the country has been a wonderfully fulfilling experience. They’re friendly, they’re excited, they’re enthusiastic, and they’re very dedicated to what they do for a living. It’s an honor to work with them.

Yolanda: It is so enjoyable working with the small town police departments. It’s quite different from large. I mean, large departments have thousands of people working in one agency. And, in your smaller towns, I think that it’s a little bit more of a family feeling. Police always say "my brother" or "my sister," as in their coworkers, but I think in a small town, you feel that even more. I think you have less ego sometimes. They’re just good ol’ hometown boys or girls. And they accept everyone. They welcome us with open arms. It’s been just incredible working with them.

What’s the feeling you get when you’re finally able to give a family answers?

Kelly: That moment when you’re able to finally tell a family that the person who killed their loved one is going to be held accountable is a very satisfying moment. It’s not a happy, high-five kind of moment ever; it’s almost kind of sad, because they’re going to have to relive what happened to their loved one. And sometimes, the answer to who murdered their loved one is not a happy answer, but at least you know that one day, all of their questions will be answered.

What can the families of victims do to keep their cases from going cold?

Kelly: If you are the family member of a cold case murder victim, the squeaky wheel gets the grease. You should call your detective once a month. Be polite, but be persistent. And, let him know that you live every day with that pain, and you want him to do all that he can to remember that you’re living with that pain, so he should do all that he can to try and clear that case. That’s your right as a victim.

Yolanda, you wear a different cross in each episode. Can you tell us why and what they mean to you?

Yolanda: You know, a cross is a symbol, and I think it means many things to a lot of people. Any time I’ve ever looked at one, it always just reminded me of something that is a warm feeling. It’s sacred. It’s like maybe an angel is looking over something. So, when I wear a cross, it’s a symbol to me of an angel up there looking over the victim and hopefully helping us get where we need to go so justice can be served.

Is there a case from your past that still haunts you?

Kelly: When I was at the DA’s office, I had this drawer of my cold cases. I called it my "Waiting on God" drawer. Because, there are some cases out there that you know who did it, and there’s one in particular where we know who did it, but something’s going to have to happen in this lifetime for it to be solved. He might get divorced from his current wife, maybe he’ll feel bad enough one day to confess, though I doubt it. Some little thing is going to have to fall in place, and sometimes only God can make it happen.

Has there been a reaction from a victim’s family that surprised you?

Yolanda: On Mother’s Day, Tiffenie, a daughter of one of our victims, sent me a text that just said, "Hey Yolanda, I just want to tell you Happy Mother’s Day, and I miss you." I was very surprised. I just wasn’t expecting that, and it really made my day.

TNT is television’s destination for drama. Seen in 101 million households and ranking among cable’s top networks, TNT is home to such original drama series as Rizzoli & Isles, Major Crimes, Falling Skies, The Last Ship, Murder in the First, Perception, Dallas and Franklin & Bash. TNT’s upcoming slate of original scripted dramas includes Legends, The Librarians, Public Morals, Proof and Transporter The Series, which will make its U.S. television debut on the network this fall. TNT also features such dramatic unscripted series as Cold Justice and the upcoming On the Menu and Wake Up Call. In addition, TNT is the cable home to popular dramas like Hawaii Five-0, Castle, The Mentalist, Bones and Supernatural; primetime specials, such as the Screen Actors Guild Awards®; blockbuster movies; and championship sports coverage, including NASCAR, the NBA and the NCAA Division I Men’s Basketball Championship.