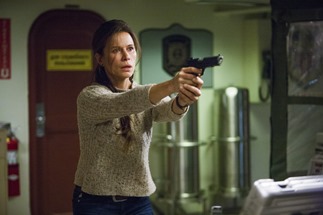 TNT has given Falling Skies a fifth and final 10-episode season; Major Crimes a third 15-ep season, and rookie sensation The Last Ship a second, 13-ep season. According to TNT, all three series rank among the top five-rated scripted series this summer.

TNT has renewed three of its chart-topping summer hits: The Last Ship, Major Crimes and Falling Skies. All three dramas rank among basic cable’s Top 5 scripted series this summer with total viewers and adults 25-54. They have also helped TNT score a significant lead as basic cable’s #1 network in primetime for the summer-to-date.

TNT has ordered 13 episodes of The Last Ship, an increase over its first-season order of 10 episodes. The network is also ordering 15 episodes for season four of Major Crimes. And Falling Skies will mark its fifth and final season with 10 episodes.

"TNT’s refreshed and recharged drama brand is soaring this summer, and that is due in large part to these three enormously popular dramas," said Michael Wright, president, head of programming for TNT, TBS and Turner Classic Movies (TCM). "The Last Ship has become this summer’s top drama among key adult demos with its epic scale and visceral storytelling. Major Crimes continues to be one of the most enduring and popular crime-drama franchises on television. And Falling Skies has begun an ambitious and thrilling story arc this summer as it sets the stage for next year’s climactic final season."

The Last Ship is a blockbuster hit in its first season, not only among total viewers but also among key adult demos. The action-packed drama from executive producer Michael Bay has averaged more than 7.2 million viewers in Live + 7 delivery in its first season and currently ranks as basic cable’s #1 scripted series this summer with adults 18-49 and adults 25-54. The show is also cable’s #1 new series for the year-to-date among total viewers and adults 25-54.

Major Crimes is showing an uptick over last year, with 7 million viewers in Live + 7 delivery for its third season so far. It ranks second behind Rizzoli & Isles among the summer’s top scripted series on basic cable. Major Crimes has also drawn key demo deliveries of 2.1 million adults 25-54 and 1.5 million adults 18-49.

Falling Skies has averaged more than 5.5 million viewers in Live + 7 delivery for its fourth season, including 2.5 million adults 25-54 and 2.1 million adults 18-49. It ranks behind The Last Ship and Rizzoli & Isles among basic cable’s Top 3 scripted series this summer with adults 25-54.

TNT will continue to roll out summer dramas in August. The network will launch the highly buzzed-about drama Legends, starring Sean Bean, on Wednesday, Aug. 13, at 9 p.m. (ET/PT). It will be followed by Franklin & Bash, which is coming back for its fourth season. And on Aug. 18, Dallas will return to continue its third season.

Complete descriptions for TNT’s newly renewed series are included below. The network will announce additional summer renewals in the coming weeks.

TNT’s action-packed drama The Last Ship, stars Eric Dane (Grey’s Anatomy) and is executive-produced by blockbuster filmmaker Michael Bay (Transformers). The Last Ship opens with a global catastrophe that nearly decimates the world’s population. Because of its positioning, the Navy destroyer U.S.S. Nathan James avoids falling victim to the devastating tragedy. But now, Captain Tom Chandler (Dane) and his crew must confront the reality of their new existence in a world where they may be among the few remaining survivors. Rhona Mitra (Strike Back) plays Rachel Scott, a strong-willed, intelligent and fearless paleomicrobiologist assigned to the ship. Adam Baldwin (Firefly, Chuck) is XO Mike Slattery, a former homicide detective and Chandler’s second-in-command. Also starring in The Last Ship are Travis Van Winkle (Heart of Dixie), Charles Parnell (Pariah), Christina Elmore (Fruitvale Station), Sam Spruell (Snow White and The Huntsman) and Marissa Neitling (Leverage). Based on William Brinkley’s popular novel, The Last Ship comes to TNT from Bay’s Platinum Dunes and its partners, Brad Fuller and Andrew Form, whose credits include the upcoming Teenage Mutant Ninja Turtles. Bay, Fuller and Form have served as executive producers, along with series co-creators Hank Steinberg (Without a Trace, The Nine) and Steven Kane (The Closer), and director Jack Bender (Lost).

TNT’s epic drama Falling Skies – from Amblin Television and executive producer Steven Spielberg – tells the extraordinary story about life and survival in the wake of a catastrophic alien invasion. Noah Wyle stars as Tom Mason, a college professor who became an unlikely resistance leader. Moon Bloodgood is Dr. Anne Glass, a pediatrician who became the survivors’ primary physician and eventually fell in love with Tom. Will Patton is Colonel Weaver, the gruff and emotionally scarred commander leading the battle against the invaders. Also starring in Falling Skies are Drew Roy, Connor Jessup, Maxim Knight, Colin Cunningham, Seychelle Gabriel, Mpho Koaho, Sarah Carter, Doug Jones and Scarlett Byrne. Since premiering as basic cable’s #1 new series of 2011, Falling Skies has ranked as one of the Top 20 original series on basic cable with total viewers and key adult demos. In addition to Spielberg, Falling Skies is executive-produced by Amblin Television heads Justin Falvey and Darryl Frank, along with David Eick and Greg Beeman.

TNT is television’s destination for drama. Seen in 101 million households and ranking among cable’s top networks, TNT is home to such original drama series as Rizzoli & Isles, Major Crimes, Falling Skies, The Last Ship, Murder in the First, Perception, Dallas and Franklin & Bash. TNT’s upcoming slate of original scripted dramas includes Legends, The Librarians, Public Morals, Proof and Transporter The Series, which will make its U.S. television debut on the network this fall. TNT also features such dramatic unscripted series as Cold Justice and the upcoming On the Menu and Wake Up Call. In addition, TNT is the cable home to popular dramas like Hawaii Five-0, Castle, The Mentalist, Bones and Supernatural; primetime specials, such as the Screen Actors Guild Awards®; blockbuster movies; and championship sports coverage, including NASCAR, the NBA and the NCAA Division I Men’s Basketball Championship.