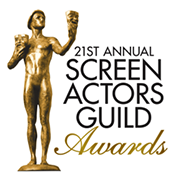 LOS ANGELES – As Hollywood prepares to celebrate the 21st Annual Screen Actors Guild Awards®, host networks TNT and TBS are revving up plans to make this year’s ceremony an exceptional digitally connected awards show. In addition to simulcasting the SAG Awards® live from the Shrine Auditorium on Sunday, Jan. 25, the networks will have a team of social media correspondents and influencers to provide behind-the-scenes play-by-play before and during the ceremony using the hashtag #sagawards. In addition, TBS and TNT are once again teaming up with PEOPLE.com to present a live webcast of the SAG Awards Red Carpet Pre-Show, which will also include the announcement of this year’s honorees for Outstanding Action Performance by a Stunt Ensemble in a Film and in a Television Series.

At the center of the SAG Awards digital campaign is social media ambassador Matt McGorry, who stars in How to Get Away with Murder and is a SAG Awards comedy ensemble nominee for Orange Is the New Black. Through his Twitter, Facebook and Instagram handles, McGorry has been giving viewers an inside look at the spectacular event, including updates on the production, presenters, showroom, set design, seating chart, rehearsals and anything else that happens during the crucial days leading up to the show. He will also be posting from the glamorous red carpet on awards night.

Lifestyle expert, professional chef and thelodown.com founder Lo Bosworth and lifestyle, beauty and fashion bloggers Marianna Hewitt and Sazan Barzani will also be serving as official SAG Awards social media correspondents. Throughout the ceremony, this team will provide fans with a live, all-access pass to rarely seen behind-the-scenes moments, from rehearsals to the star-studded red carpet to the Actor® recipients’ whirlwind trip through the backstage media gauntlet.

In addition to the SAG Awards excitement in social media, TBS, TNT and PEOPLE will also bring the magic of the red carpet to the digital realm with the SAG Awards Red Carpet Pre-Show. PEOPLE’s deputy editor of entertainment JD Heyman, and TNT correspondent Danielle Demski, are set to host the online special, interviewing this year’s nominees, presenters, past recipients and other attendees as they walk the red carpet on their way into the prestigious ceremony. PEOPLE’s style & beauty director Andrea Lavinthal will also be providing commentary on all the red carpet fashion.

About the Screen Actors Guild Awards®

The 21st Annual Screen Actors Guild Awards® presented by SAG-AFTRA with Screen Actors Guild Awards, LLC will be produced by Avalon Harbor Entertainment, Inc. and will be simulcast live on TNT and TBS on Sunday, Jan. 25, 2015 at 8 p.m. (ET) / 5 p.m. (PT). A primetime encore presentation will follow immediately on TNT. The SAG Awards can also be viewed live on the TNT and TBS websites, and also the Watch TNT and Watch TBS apps for iOS or Android. (Viewers must sign in using their TV service provider user name and password)

One of the awards season’s premier events, the SAG Awards annually celebrates the outstanding motion picture and television performances from the previous calendar year. Of the top industry honors presented to actors, only the SAG Awards are selected entirely by 111,228 performers’ peers in SAG-AFTRA. The SAG Awards was the first televised awards show to acknowledge the work of union members and the first to present awards to motion picture casts and television ensembles. For more information about the SAG Awards®, SAG-AFTRA, TNT and TBS, visit sagawards.org/about.

Connect with the SAG Awards®