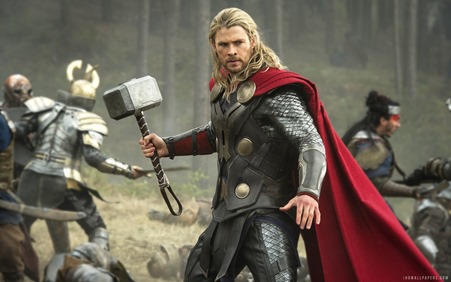 Even though it is darker than Thor’s introductory movie, Thor: The Dark World is fun – largely because Thor – even more than Captain America – is Marvel’s most irony-free character. That and because Chris Hemsworth and Tom Hiddleston are such perfectly cast brothers.

Thor: The Dark World opens with a brief prologue explaining who Malekith (Christopher Eccleston) and the Dark Elves were/are and what the Aether (pronounced ether) is. Then it shifts into fifth and stuff starts happening: Dr. Erik Selvig’s (Stellan Skarsgard) apparent madness (streaking Stonehenge carrying some odd scientific equipment); Thor, Sif (Jaime Alexander) and the Warriors Three – Hogun the Grim (Tadanobu Asano), Volstagg the Voluminous (Ray Stevenson) and Fandral the Dashing (Zachary Levi, replacing Josh Dallas) – restoring order on one of the nine worlds that comprise Yggdrasil; Darcy (Kat Dennings) interrupting Jane Foster’s (Natalie Portman) lunch date to drag her off to see something really cool; Jane inadvertently being possessed by the Aether and the awakening of the Dark Elves.

And that’s just for starters.

It all leads to Malekith and his people seeking vengeance on Asgard and attempting to destroy the nine worlds and the universe to its pre-Big Bang state of darkness (hence Dark Elves…) – which in turn leads to Thor taking Jane to Asgard; the Dark Elf invasion, and spectacular action sequences that could have been drawn by Jack Kirby.

Make no mistake – Thor: The Dark World is an action-packed epic that features more fight sequences than any Marvel movie not called The Avengers. Thor pummels and is pummelled; there are scenes of Asgardians falling before Malekith’s onslaught as they search for the Aether; a sequence featuring Thor and Loki and the Dark Elves that is staggeringly emotional as well as epic. For the first time, we see Frigga (Rene Russo) as someone to be feared. 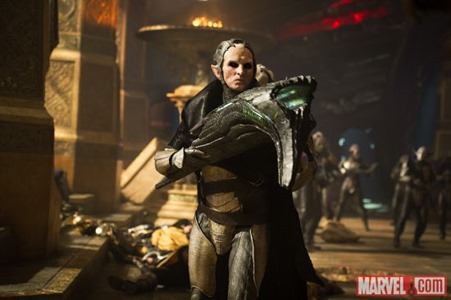 People die – on both Earth and Asgard. And yet, thanks primarily to Hemsworth and Hiddleston, and a refreshing lack of irony, Thor: The World is more pure fun than even the first two Iron Man movies.

Hemsworth continues to remind of Christopher Reeve in his combination of heart and the ability to handle throwaway lines and off the cuff humor with panache. Hiddleston, of course, continues to play the walking contradiction in terms that is Loki, the god of mischief and magic.

While the movie is great fun, it becomes something magnificent when Loki and Thor are onscreen together. Thor so wants Loki to be the brother he used to know. Loki equally loves and hates Thor – but there is someone whom he does love; and something that sparks a rage in him that we have seen before.

Director Alan Taylor (Game of Thrones) knows how to stage action on every level, from intimate to epic – and how to capture moments of emotion. If he doesn’t create a movie with quite the Shakespearean drama of Kenneth Branagh, he does know how to play to his audience and keep things from ever getting boring.

The screenplay – by Christopher L. Yost, Christopher Markus and Stephen McFeeley – is complex enough and smart enough to feel like a good Marvel comic and a bit more. It gives us the humor, wit and drama that fit within the scope of a grand comic like Thor, while also capturing its more human elements.

The result is a movie that requires some attention – it is a bit complex – but rewards it with two movies’ worth of entertainment.

P.S. There’s a mid-closing credits scene that links Thor: The Dark World to Guardians of the Galaxy – and provides further evidence that Benicio Del Toro gets the craziest hair in any movie he does.

P.P.S. There’s an actual tag to the movie at the very end of the closing credits – and one wag in the audience shouted, ‘SHAWARMA!’ as it began.