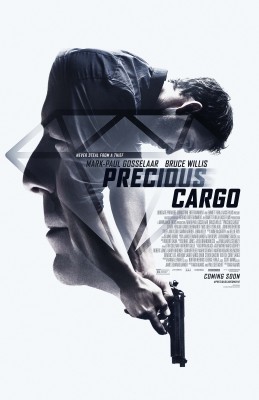 If you need a thief, Jack is the best. Crime boss Eddie needs a thief, but isn’t one to ask politely – so he kidnaps Karen, Eddie’s still much beloved ex. Jack is not cool with that, so he plans to save Karen and keep Eddie’s loot for himself and his crew.

Probably not the best idea.

Precious Cargo stars Bruce Willis (Eddie), Mark-Paul Gosselaar (Jack) and Claire Forlani (Karen). Check out the trailer after the break. Precious Cargo will be in theaters and On Demond on April 22nd.

Never steal from a thief. PRECIOUS CARGO, a new heist thriller, stars Bruce Willis and Mark-Paul Gosselaar. In theaters and on demand April 22.

After a botched heist, Eddie (Bruce Willis), a murderous crime boss, hunts down the seductive thief Karen (Claire Forlani) who failed him. In order to win back Eddie’s trust, Karen recruits her ex-lover and premier thief Jack (Mark-Paul Gosselaar) to steal a cargo of rare precious gems. But when the job goes down, allegiances are betrayed and lines are crossed as Jack, Karen, and Eddie face off in a fateful showdown. Lionsgate Premiere will release the action-thriller in theaters and on demand on April 22.