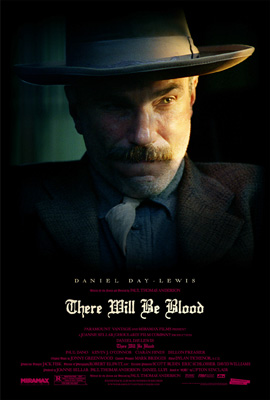 There Will Be Blood is the story of Daniel Plainview [Daniel Day-Lewis] from the time he switched from being a hardscrabble silver mine to becoming the biggest oil tycoon in Texas and California. He is a solitary sort, his only companion being his young son, H.W. [Dillon Freasier], to whom he refers as “my son and business partner.”

In a sense, Plainview is a Shakespearean character – bigger than life and appearing to be on thing while actually being another. As he collects the oil rights to a number of properties, he espouses that he is a plain-spoken man who likes to deal in a direct, honest way with those deals with. Perhaps that was even true at some early point before he hit it big.

Before long, though, he is willing to do whatever it takes to get what he wants. This leads him into a complicated relationship with an evangelical preacher [Paul Dano] whose family property is among the first he exploits. It is only one piece of a puzzle that he puts together by buying the oil rights to all the surrounding land – including that of an old codger who won sell unless he joins the preacher’s church. Sometimes God works in mysterious ways – but sometimes, we mortals can be just as sneaky. 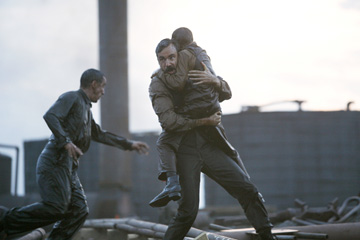 Before our eyes, Plainview becomes harder and colder – or was he always that way and his silver tongue kept us from realizing it? When he springs his trap on the preacher, Paul Sunday, it is surely not the work of a “plain-spoken man” – but it is not yet time for the true depths of Plainview’s soul to be revealed…

There Will Be Blood functions on a number of levels, not all of them obvious. On one level, the film is a Shakespearean tragedy, with Plainview going from apparently honest, hard working silver miner to demented – but not doddering evil. On another, it is a commentary on the evils of pure capitalism [the depths to which Plainview sinks in acquiring his riches – and the shattered souls he leaves in his wake]. Yet another level explores the importance family – or lack of same, and its appearance to others. 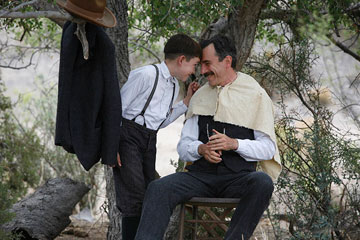 When H.W. is deafened in the roar of an exploding well, Plainview sends him away to receive the help he needs and is castigated for abandoning the boy. Once H.W. is able to communicate through signing, he returns – with a translator. Eventually, though, he seeks to go out on his own and we see how important family really is to Plainview.

There Will Be Blood is, like all of Anderson’s films, exquisitely shot. There isn’t a frame of film that hasn’t been carefully thought out and framed in just the right way to serve the story. Robert Elswit [who has been cinematographer on all of Anderson’s films] is a master at capturing both expansive vistas and the most intimate of moments. The wide shot that frames Plainview’s first gusher and the more intimate shot of Plainview’s anguish when he realizes H.W. is hurt both work because of the way Elswit crystallizes Anderson’s vision.

With There Will Be Blood just now entering wide distribution, after two weekends in New York, Los Angeles and Toronto, it will be interesting to see if the public at large is willing to sit through over two-and-a-half hours of this deliberately paced, multi-levelled film. It is a rewarding film, but Anderson makes one work for it. Nothing here is as easy as Plainview’s skill at getting what he wants. That is what makes the film so rewarding.