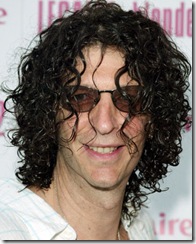 NBC announced this morning that shock jock Howard Stern will be the new judge for season seven of America’s Got Talent – for which, the show will move to New York. Even I, who loathe reality TV and the seemingly infinite number of ‘talent’ shows out there, might just have to check this out when the show returns. Might be fun.

UNIVERSAL CITY, Calif. – December 15, 2011 – NBC announced today that Howard Stern, American radio personality, television host and author, will serve as the new judge on the top-rated summer alternative series “America’s Got Talent,” produced by FremantleMedia North America and Simon Cowell’s SYCO Television.
Stern will provide his feedback on the colorful array of hopeful future stars who are currently auditioning in major cities around the country for the show’s upcoming seventh season.
Production of the live shows of “America’s Got Talent” also will be moving to New York, where Stern will continue to helm his SiriusXM radio program.

The announcement was made by Paul Telegdy, President, Alternative and Late Night Programming, NBC.
“Howard Stern’s larger-than-life personality will bring a thrilling new dynamic to ‘America’s Got Talent’ starting this summer,” said Telegdy. “He’s a proven innovator and his track record in broadcasting is truly remarkable. Howard is very passionate about this show and is fully committed to its future success.”

Stern helped to transform American radio and put syndicated satellite radio on the map on SiriusXM. As the outspoken, unedited and headline-grabbing host of “The Howard Stern Show” radio program, Stern was nationally syndicated from 1986 to 2005 and became a pop-culture icon with a massive loyal fan base. Since 1987, he has hosted numerous television shows, record-breaking pay-per-view events and home video releases. He also embarked on a five-month political campaign for governor of New York in 1994.

His two books, “Private Parts” (1993) and “Miss America” (1995), spent 20 and 16 weeks, respectively, on The New York Times bestseller list. The first book became a national sensation and was adapted into the feature film “Private Parts” (1997), a biographical comedy film that starred Stern and his radio show staff — and was a box-office success. Additionally, Stern performed on the film’s soundtrack which topped the Billboard 200 chart. Stern currently broadcasts his show “Howard 100” on the SiriusXM satellite radio station.

"America’s Got Talent" was the #1 non-sports telecast on ABC, CBS, NBC or Fox in total viewers every week it aired over the summer of 2011, making it the #1 summer series in total viewers for a sixth year in a row. Last summer, "America’s Got Talent" delivered its highest-rated cycle ever.
“America’s Got Talent” is the only talent competition show that is open to any age and any talent. Auditions for season seven kicked off in October with upcoming open calls set for Austin, Texas, Charlotte, N.C. and San Francisco, Calif. For all the latest information and to pre-register, go to www.AGTauditions.com.