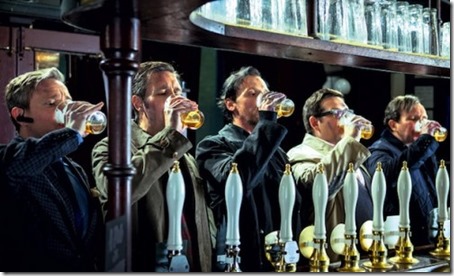 L. Frank Baum wrote, ‘There’s no place like home.’ Thomas Wolfe coined the expression, ‘You can’t go home again.’ Oddly enough both expressions apply to the final film in Edgar Wright’s Three Flavours: Cornetto Trilogy – possibly the best of the summer blockbusters and a pure delight to encounter as summer tentpoles get more and more ridiculous.

This is the set up for The World’s End is this: forty-ish Gary King (Simon Pegg) tries to unite with four old friends – Andy Knightley (Nick Frost), Oliver Chamberlain (Martin Freeman), Steven Prince (Paddy Considine) and Peter Page (Eddie Marsan) – to complete an epic pub scrawl that, even though they failed to do it in their twenties, remains the best night of his life (The World’s End is also the pub that awaits the end of that pub crawl).

The four have moved on with their lives – though they might not be happy, generally, they seem to be more together than Gary with his battered black duster and party-like-it’s 1999 lifestyle – so it takes a bit of work (and some creative lying) to get the old band back together. It’s just a shame that, while their hometown of Newton Haven – a prototypical quiet, boring English town, might just be the site of the apocalypse.

Like Wright’s previous Cornetto films (like this one, co-written with Pegg), Shaun of the Dead and Hot Fuzz, The World’s End uses a genre façade – in this case, apocalyptic sci-fi – to explore themes like growing up, the perils of nostalgia and the construction of character through drama, melodrama and running jokes (literally in all three films). 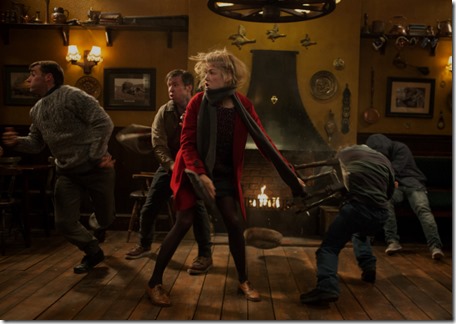 The cool thing about The World’s End is that it makes a case for both growing up and becoming responsible and for arrested development – or at least, it gives them equal time and doesn’t judge (it seems you can be equally unhappy in either case…). The fact that Gary hasn’t changed is what brings the group together; the fact that they have changed is what gives them a sense of purpose once they get the pub crawl started. Then there’s the whole Invasion of the Body Snatchers thing…

Gary plays on nostalgia (and cleverly using each of his friends’ supposed agreement) to persuade the others to return to Newton Haven, but the town is not their home – both because it has changed under the surface and because most of them have also changed. As a result, there’s no place like home because it’s not the place they remember and they can’t go home because both they and the town have changed. In what could be seen as the most horrific change, most the twelve pubs on The Golden Mile of the pub crawl have been, as it’s put in the movie, ‘Starbucked’ – they look exactly alike…

As the five become aware of the unusual situation unfolding around them, they fall back on a typically British response – belly up to the bar and finish their drinks. It’s a simple case of genius on the part of Pegg and Wright.

Also a stroke of genius is having Oliver’s sister, Sam (Rosamund Pike) show up. She’s outside the group and serves as an observer of Gary’s lack of change (they had a moment in the disabled stall before they left town) and as the one who has to be shown what’s going on before she can believe. Her acceptance validates both the changed and unchanging members of the group – while giving Pike more substance to work with than her last half-dozen movies. She also provides a bit of romantic conflict – Steven always had a thing for her…

As with Shaun of the Dead and Hot Fuzz, Wright directs The World’s End with a deft touch, making the pouring of beers as dramatic and important as the character development (or lack of same) and the full bore action scenes (in which the group show chops that would do generations of football hooligans and martial artists proud) – two world: stool boxing. He also gives new meaning to term ‘blue bloods.’

Casting plays a huge role here, too – casting Pegg as the stuck-in-time Gary and Frost as the responsible executive type works precisely because they are working against type and yet, their unique chemistry makes them completely believable. Although marginally more time is devoted to Gary and Andy, Considine, Freeman and Marsan do a lovely job presenting us with characters who have evolved at least seemingly for the better.

There are themes and messages in The World’s End, but they’re developed in service to an entertaining, refreshing observant and explosively funny movie. Like the people of Earth, this is a movie that insists on going its own way, whether that’s the best course or not. To say that hialrity ensues would be an understatement!

Wright has used conventions we’ve seen before to do something with a fresh spin. And yes, there is the obligatory Cornetto reference – though it is not what you’ll be expecting. As I had hoped, The World’s End is a film that will hold up under multiple viewings. It effectively saves the dog days of August from being the exclusive dumping ground for more and more ludicrous would-be tentpoles.