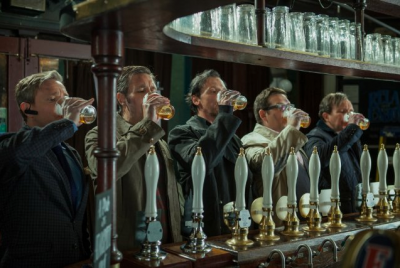 Ok, who doesn’t love the film team of Simon Pegg, Edgar Wright and Nick Frost? Their past team ups have lead to sublime comedy classics like Shaun of the Dead and Hot Fuzz.  Their latest The World’s End, while not as funny as their previous efforts, this one is probably their most confident and well-conceived film yet. It pays to watch this film a couple of times as there are a lot of nice little Easter eggs and foreshadowing.

While I enjoyed the heck out of this movie, I couldn’t help but compare it to this summer’s other post apocalyptic disaster comedy This Is The End. Even the titles are similar. This is the End wanted to go for broad strokes funny, which it was, but failed as a film making exercise. Edgar Wright and company set out to make a real movie and their brand of comedy is generally subtler – they are Brits after-all.

The World’s End has a great opening where the entire story is laid out in a well framed, well told tale of five high-school friends who had their entire futures to look forward to. On one of their last nights together the group they try The World’s End bar challenge – hit 12 bars in one night.  When they failed the Challenge, things went completely wrong for the group’s leader Gary King (Simon Pegg).  His life was never the same after that fateful night. 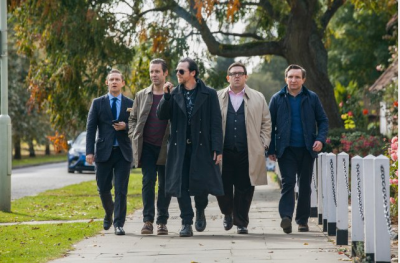 Determined to get his life back on track he seeks out his old posse – Andy (Nick Frost), Oliver (Martin Freeman), Steven (Paddy Considine), and Peter (Eddie Marsan). All of his friends have moved on with their lives and had no interest in going back to their hometown until Gary tricked them.

The humor in this film successfully straddles the line between sarcastic and in your face, but it never becomes mean spirited. While it does go for the obvious, easy jokes, it doesn’t degenerate into cheap profanity or potty humor. Which, a movie about drinking until you are “blind”, could easily do.

I loved the chaotic fight choreography used here. Nothing looked overly staged; everyone just threw down on each other and used a combination of everything that they’ve watched on TV. There’s a great moment where Andy does a “Rock Bottom” on someone. I’ve never seen a real life Bar Brawl, but I’d imagine it’d be something like this.

The movie works well as a comedy and I wish it stayed in the modern, real world, the robots and Sci-Fi elements just takes you out of it as it they just look cheaply made and honestly, didn’t make much sense within the context of everything else going on. It made me feel like I was watching two different movies shoved into one.

It’s the same problem that I had with This is the End.  All the weird sci-fi stuff just wasn’t needed. This movie is about these 5 guys coming together and trying to reconnect and on this basis it largely succeeds.