Now that The Walking Dead’s Tyreese has shuffled off this mortal coil, Chad Coleman has moved into a new gig – executive producing TREADWATER, as he mentioned on Talking Dead following Sunday’s premieres of The Walking Dead and Better Call Saul.

What is TREADWATER? It’s an ambitious transmedia production that includes a thirty part graphic novels series (volume one is available on Amazon now), TV series, an interactive web experience and video game.

The situation is that the Euro has crashed and Europe has largely become a war zone as looting, rioting and acts of terrorism abound. In thirty ‘grey zones’ all police and military have pulled out.

The richer-than-god Allen Downes created The Candlelight Program to deal with the chaos. TREADWATER is the name given them by the press. For more, follow the jump (and be sure to check out the extremely well thought out website). 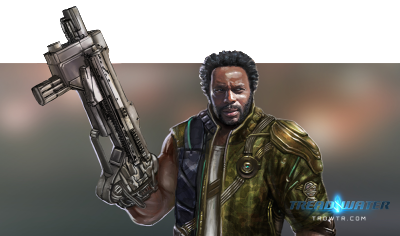 Actor Chad L. Coleman (Tyreese) from AMC’s The Walking Dead
joins TREADWATER as an executive producer.
Actor Chad L. Coleman (Tyreese) from AMC’s The Walking Dead
joins TREADWATER as an executive producer. New York. Chad Coleman is the actor who plays Tyreese in AMC’s TV drama The Walking Dead. His character’s death in the midseason premiere has been a significant occasion in many respects. Mr. Coleman used this opportunity to announce his next project.
“Go to trdwtr.com […] it’s something that I’m executive-producing,” said Coleman to Chris Hardwick on this week’s episode of the Talking Dead. TREADWATER is the next milestone of Chad Coleman’s career. It shares many similarities with its predecessor.
TREADWATER is a transmedia franchise that comprises 30 graphic novels, a TV series, an interactive web experience and a video game. The franchise has been in the works since 2012. Coleman joins the TREADWATER team at a unique point where most of the franchise has been developed, and is now awaiting public release.
The story of TREADWATER takes place 15 years into the future, where the crash of the Euro has led to a resurgence of authoritarian regimes on the European continent. The graphic novel series tells the stories of 6 uniquely desperate people who have been recruited by a private organization to maintain what little peace there is left.
Similarly to The Walking Dead, TREADWATER is marked by a mature and realistic tone. No character is given preferential treatment so that he or she could be seen as the main protagonist. Instead, each character is presented with complex moral choices, blurring the lines between the ‘heroes’ and the ‘villains’ of the series.
The first graphic novel of the 30-part series came out in October 2014 via Amazon. It is expected to hit stores nationwide in March or April of this year. The novel has been written and created by Morgan Rosenblum, founder of Darkrose Studios, and illustrated by Ray Dillon, best known for his work on Borderlands 2 and Game of Thrones.
Those wishing to dive right into the rich world of TREADWATER can already do so at http://treadwater.tv/. The page provides a uniquely interactive experience, which serves as a central hub for all components of the transmedia franchise.
The website challenges its visitors to take an entrance exam to become TREADWATER operatives and complete various real-world missions. As a reward for completing these missions the players can unlock troves of unreleased content, including: video cut scenes, concept art, an original score, as well as large portions of the graphic novel. As TREADWATER executive producer Chad Coleman says, “There is an operative inside all of us.”
http://treadwater.tv
Twitter: @trdwtr
Instagram: @treadwater
Facebook: facebook.com/trdwtr