Entertainment News for The Rest of Us
Tiffany D'Emidio
Video Games 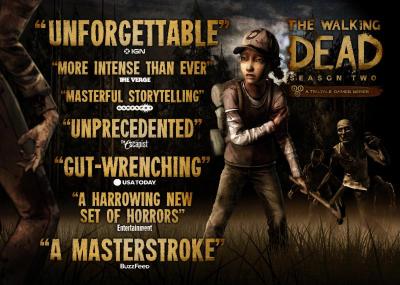 The Walking Dead game fans it’s time to celebrate! Both seasons of Telltale’s critically-acclaimed series available on PlayStation 4 and Xbox One for the first time. Available now in stores in North America and available in Europe on October 31st.

Futher details after the jump.

SAN RAFAEL, Calif., Oct 21st, 2014 — Leading publisher of digital entertainment Telltale Games and Robert Kirkman, the Eisner Award-winning creator and writer of The Walking Dead for his Skybound imprint at Image Comics, today announced the release of The Walking Dead: The Complete First Season – A Telltale Games Series, as well as The Walking Dead: Season Two – A Telltale Games Series; both available now in stores at retail and for download on PlayStation 4 and Xbox One for the first time in North America, and available in Europe on October 31st. Retail editions will also be available for the first time on Xbox 360 and PlayStation 3.

The Walking Dead is set in the world of Robert Kirkman’s award-winning comic book series and offers an emotionally-charged, tailored game experience where a player’s actions and choices affect how their story plays out across the entire series.

“Since the series premiere in 2012, the team has been incredibly proud to continue breaking new ground in the art of interactive drama as part of Robert Kirkman’s award-winning universe,” said Kevin Bruner, President and Co-Founder at Telltale Games. “Now available on over six thousand devices from console to mobile, the Xbox One and PlayStation 4 formats usher in an even greater reach for Telltale, and we’re excited to be preparing players across the world for a thrilling third season that’s yet to come.” 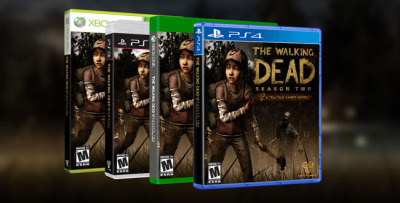 To date the series has sold more than 39 million episodes worldwide, with its first season earning more than 90 Game of the Year awards from outlets including Metacritic, USA Today, Wired, Spike TV VGAs, Yahoo!, The Telegraph, Mashable, Polygon, Destructoid and GamesRadar, and also the recipient of two BAFTA Video Games Awards for Best Story and Best Mobile Game.

The second season finale was met with critical praise in the press, with IGN.com awarding the episode an Editor’s Choice 9.5 out of 10 rating, calling it “provocative, painful, and unforgettable,” saying, “This is perhaps the most heartbreaking and tense episode of anything Telltale has ever made. How Clementine braces for the impact of everything in front of her is up to you — and where that takes her left me in awe.”  Nerdist.com also gave the finale a Perfect 5 out of 5 Score, saying, “Grisly, gripping, but never gratuitous – Season 2 of The Walking Dead was one of the best gaming experiences I’ve had in quite some time, and No Going Back is a real mic drop moment for the series.”

The Walking Dead: Season Two – A Telltale Games Series continues the story of Clementine, a young girl orphaned at the outset of the undead apocalypse, left to survive in a world gone mad.  Players will struggle to outwit both the dead and the living in situations that will test their morals and control the flow of the story through the choices that they make.

Image Comics is a comic book and graphic novel publisher founded in 1992 by a collective of best-selling artists. Image has since gone on to become one of the largest comics publishers in the United States. Image currently has five partners: Robert Kirkman, Erik Larsen, Todd McFarlane, Marc Silvestri and Jim Valentino . It consists of four major houses: Todd McFarlane Productions, Top Cow Productions, Shadowline and Image Central. Image publishes comics and graphic novels in nearly every genre, sub-genre, and style imaginable. It offers science fiction, romance, horror, crime fiction, historical fiction, humor and more by the finest artists and writers working in the medium today. For more information, visit www.imagecomics.com.

Telltale is a leading independent developer and publisher of games for every major interactive platform from home consoles and PC to mobile and tablet devices, and is the pioneer of the episodic delivery of digital gaming content. By successfully developing games as an episodic series and frequently releasing in the format a game season, they create longer consumer engagement than traditional games for each release. Founded in 2004 by games industry veterans with decades of experience, Telltale has quickly become an industry leader with numerous honors and awards from the Academy of Interactive Arts and Sciences, BAFTA, the IMGA, and more, as well as being named Studio of the Year in 2012, after establishing a model for successful episodic game creation and digital publishing. Telltale’s reputation for quality has been established across more than two dozen different product releases over the years with recognition and acclaim from publications like IGN, The New York Times, and Variety, including over 100 “Game of the Year” awards from publications like USA Today, Yahoo! Games, Wired, Spike TV VGAs, E!, Official Xbox Magazine, The Telegraph, Metacritic, and more.  Telltale is a fully licensed third party publisher on consoles from Microsoft, Sony, and Nintendo, and also publishes games on the PC, Mac, and Apple iOS platforms. For more information visit www.telltalegames.com.