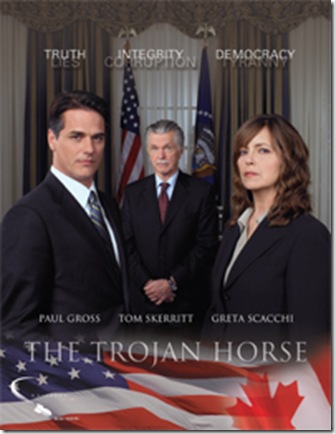 In 2004, during the last US Presidential election, Canadian broadcaster CBC aired “H2O”, an edgy, well-written and compelling drama about the sale of water to an increasingly thirsty USA, which ended shockingly with the annexation of Canada by its neighbour.  Having attracted an array of awards, including the 2005 Monte Carlo TV Festival award for best actor in a mini-series for Paul Gross, who stars as Tom McLaughlin, the last Prime Minister of Canada, a sequel was always on the cards.

That sequel is “The Trojan Horse”, airing in two parts on CBC on 30 March and 6 April at 8.00pm EST – while once again the world watches as the US Presidential elections roll on, blurring the lines between the real and the fictional dramas.   The story of “The Trojan Horse” picks up at the point where Canada has dissolved its independence and become part of the US. Couldn’t happen? Well, the story behind “H2O” has a basis in reality and is, the producers say, as much a warning as a drama.

Penny McDonald, Assistant Producer at Whizbang Films, says McLaughlin’s main failing in his complex scheme to market the water supply is simply to underestimate the power of the United States. And, although she agrees that Tom is a traitor, his character is more complex than simply the bad guy.

“He’s diabolical,” she says on the phone from Toronto, “but I think in a way his heart is in the right place.”  This, she says, is more apparent in “The Trojan Horse”, when Tom runs for President of the US, with the backing of big money from Europe.

The timing of the drama’s broadcast is coincidental but beneficial.  Certainly, airing the show later, after the US elections, might have been disadvantageous.

“We find that after the election happens viewers are fatigued with all the political talk, so it’s important to get it on the air while it’s a hot issue,” McDonald confirms. 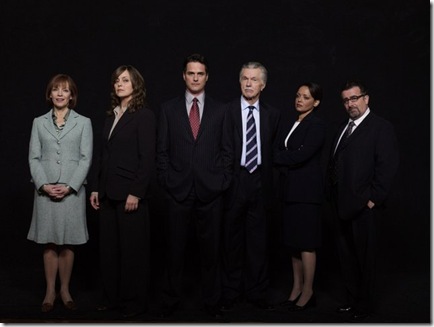 Yet, despite what must be a rich seam for potential drama, “H2O” and “The Trojan Horse” are pretty much on their own in the genre of Canadian political thrillers. Why is this?

McDonald has a simple answer. “It’s expensive. Honestly, it’s expensive and it’s hard to find your audience. I know that the people that watch these shows really enjoy them but it’s a long road getting them made.”

A long road for which, she says, you need the tenacity of people like Paul Gross, the star of the show, who is also the co-writer and executive producer.

“The Trojan Horse” also features Tom Skerritt as President Stanfield, Greta Scacchi as journalist Helen Madigan, and the late William Hutt as Sir Miles Fortum, head of the British MI6, in his last role before his death in 2007.

3 thoughts on “The Trojan Horse: A uniquely Canadian political thriller”