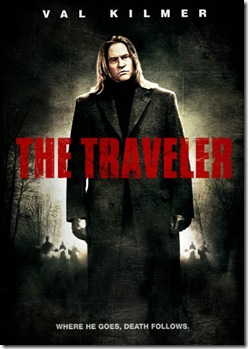 Like Nicolas Cage, Val Kilmer has made a number of really good, even great, movies – and twice as many dogs. Also like Cage, even a majority of Kilmer’s duds are worth watching just because he has that same kind of crazy lurking beneath the surface and you just don’t know what he’s going to do next. Sadly, Kilmer is the only reason to watch The Traveler – a supernatural potboiler that attempts to set up a dream logic then fails to produce.

It’s Christmas Eve and the precinct house is deader than dead – until a looming, long-haired guy [Kilmer] walks in and declares his intention to confess to a whole lot of murders. The freaked out desk sergeant, Gulloy [Christopher Gauthier, Eureka] grabs his gun and hollers for help. The other five unfortunates who are stuck on duty for the holiday come running and haul the stranger, who refers to himself as Mr. Nobody, to an interrogation room.

As Mr. Nobody is processed, weird things begin to happen: he has no fingerprints – they haven’t been burnt off with acid or anything, he just doesn’t have any; his mug shots show his clothes, but not his hands or head, and [a sure sign of a coming apocalypse] the station’s lights begin going out!

The film opens with a brief prologue: a little blonde girl playing, then being abducted. A flashback connects her with Detective Alexander Black [Dylan Neal, Blood Ties, Babylon5: Legend of the Rangers] and seems to provide a reason for Mr. Nobody’s presence. Then cops start dying – in varied and grotesque manners.

Directed by Michael Oblowitz [The Breed, Sea of Darkness], from a script by Joseph C. Muscat, The Traveler wants to be one of those supernatural thrillers than mix elegance and spatter. Unfortunately, the script sets up a kind of dream logic from which it departs radically and at random. Oblowitz’s pacing ranges from too slow to just a bit too quick, and the last act features a twist that comes far too late to save the film from being anything more than a waste of space – unless, of course, you’re a Val Kilmer fan.

Even Mr. Nobody is not particularly deep, but Kilmer projects a laconic menace throughout – a kind of just beneath the surface crazy that holds one’s attention through all the supernatural silliness. If you’re a Kilmer completist, check it out – otherwise, don’t bother, because other than Kilmer, the only worthwhile moments of The Traveler come when the New York City Subway Minstrels sing a bluesy shuffle version of God Rest Ye Merry Gentlemen.