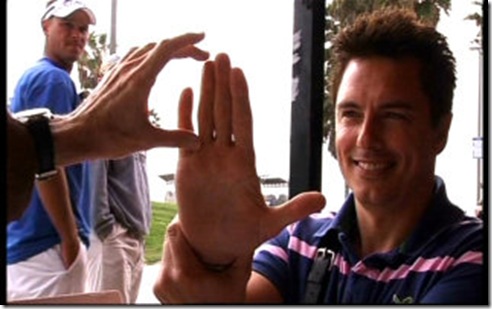 The BBC’s primetime peek at what makes three celebrities who they are ("The Making of Me", BBC1, Thursday at 9.00pm)includes asking what makes sprinters run fast and where virtuoso violinists get their musicality.   The first programme saw John Barrowman, Doctor Who and Torchwood’s Captain Jack Harkness, subject himself to a battery of tests – DNA, blood tests, FMRI, watching porn while wired to a sexual lie-detector – and challenge his parents to prove his gayness wasn’t their fault.  Well, it could have been.  After all, his dad (a twinkly Scotsman who should host his own chat show) did dress the 8-year-old John in a bikini to enter him into a fancy-dress competition while they were crossing the Atlantic on the QEII.

The scientific tests looked pretty thorough – and scary; the claustrophobic Barrowman even stayed in an FMRI scanner for 90 minutes despite suffering a panic attack.  Some strayed towards pseudo-science, such as comparing the lengths of the ring and index fingers to indicate sexual orientation.   Other findings seemed more likely, with the focus on what happens in the womb providing an interesting theory.   According to the scientists, the more boys there are in the family, the more likely the next born male will be gay, possibly due to the reducing levels of testosterone with each pregnancy.

Putting this to the test, Barrowman phoned his mum to ask whether the child she had miscarried before he was born was a boy or a girl.  It had been a boy.  So he had had two older brothers and was more likely to be gay.  It’s hardly conclusive, but adds one more fascinating theory to the whole nature-nurture debate.

As a documentary, this was populist science presented without too much of the hyperbole that usually afflicts such shows.   As a commentary, it threw a fascinating light on Barrowman and his family and the normality of daily life, irrespective of sexual orientation.   That was, in many ways, far more significant than determining why we read our maps upside down, why our index fingers are odd lengths, or why we play with Barbie dolls.   And it was pretty significant to see a non-condescending, straightforward exploration of gayness on primetime.

Away from the science, the highlight of this show was Barrowman’s interaction with his parents.   The origins of his gayness may not be determined, but there can be no doubt where the exuberant Barrowman gets his joie de vivre!

3 thoughts on “The Tellybox: John Barrowman explores "The Making of Me"”