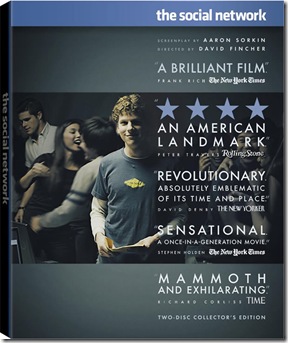 It’s a tale of sound and fury; friendship betrayed; money and the internet. The Social Network may be the story of how Mark Zuckerberg created Facebook, but it has Shakespearean range and moves like a Jason Bourne movie. Directed by David Fincher and written by Aaron Sorkin, the film is also practically littered with brilliant performances – and the DVD release gives them all their due.

The Social Network is an intricate and delicately balanced film that moves at a frenetic pace and demands its audience pay attention to the massive [and speedily delivered] dialogue. It deals less with the creation of Facebook than with the lives of the people who were connected to its creation, marketing and success – and the perceived betrayals from within that group by Zuckerberg.

Fincher, Sorkin and their tem of cast and technicians do more than a few things that are amazing here – not the least of which is making two legal depositions not only interesting but riveting! Jesse Eisenberg is exceptional as the ultra-intelligent Zuckerberg, who is always three steps ahead of everyone else in the room, but it is Andrew Garfield [Red Riding, the upcoming Spider-man reboot] who is the broken hearted, betrayed Eduardo Saverin that gives the film its emotional heft.

The film has appeared on many top ten and awards shortlists [it’s number five on my own, for that matter] and stands as a leading contender for multiple Oscars®. It’s a brilliant movie and Sony’s 2-disc DVD release is a match for the film’s quality.

Features include: two Audio Commentaries [one by Fincher; one by Sorkin and various cast members]; How Did They Ever Make a Movie of Facebook? [four-part making of documentary – Commencement, Boston, Los Angeles, The Lot]; David Fincher and Jeff Cronenweth on the Visuals; Angus Wall, Kirk Baxter and Ren Klyce on Post; Trent Reznor, Atticus Ross and David Fincher on the Score; In the Hall of the Mountain King: Music Exploration; Swarmatron [and you thought the theremin was cool!]; Ruby Skye VIP Room: Multi-Angle Scene Breakdown.

Grade: The Social Network – A+