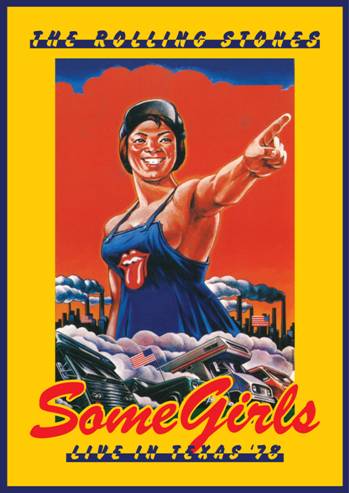 More details from the press release after the jump:

LIVE CONCERT OUT ON DVD AND BLU-RAY OUT NOW!

Continuing their partnership with the greatest rock ‘n’ roll band in the world, Eagle Rock Entertainment have announced the DVD and Blu-Ray release of The Rolling Stones Some Girls Live in Texas 1978. Available for the first time ever on November 21, Some Girls Live in Texas 1978 features Mick Jagger, Keith Richards, Charlie Watts, Ronnie Wood and Bill Wyman live in concert during the 1978 US tour which followed the release of their groundbreaking album Some Girls.

Some Girls Live in Texas 1978 comes hot on the heels of the huge success of 2010’s Stones in Exile and Ladies & Gentlemen and marks the next stage in the Eagle Vision / Rolling Stones enterprise. Some Girls Live in Texas 1978 will be available on four different formats: DVD, Blu-Ray, plus special edition DVD + CD and Blu-Ray + CD digipack presentations including a reproduction tour program. Bonus features on all formats will include a new interview with Mick Jagger.

Capturing The Rolling Stones at their live best, and fully restored to the highest level of picture and sound quality, Some Girls Live in Texas 1978 was filmed at the Will Rogers Memorial Center in Forth Worth, Texas on July 18, 1978 on what many fans consider to be one of the band’s greatest tours. This was due to the band’s ‘back to basics’ approach both musically and visually, as the shows were stripped back compared to previous tours, harnessing the new punk rock attitude of the late 70s.

Showcasing many songs from the Some Girls album, celebrated for being the Rolling Stones’ most direct and diverse collection of music, and which by the time the band arrived in Texas, had gone to the top of the US charts, this concert demonstrates the sheer force and raw energy of The Rolling Stones live on stage.

Some Girls songs like “Miss You,” “Respectable,” “Beast Of Burden,” “When The Whip Comes Down,” and “Shattered,” weave into a set list which also includes “All Down The Line,” “Honky Tonk Women,” “Tumbling Dice,” “Jumpin’ Jack Flash,” “Happy,” and “Brown Sugar.”

Originally shot on 16mm film, the concert footage has been carefully restored with the sound remixed and remastered by Bob Clearmountain from the original multi track tapes.