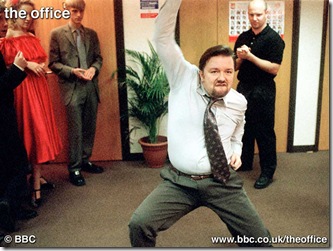 Ricky Gervais’ worldwide cult favorite, The Office, is now available, for the first time, to download and purchase on iTunes in the US – not a bad way to celebrate the show’s 10th Anniversary.

Follow the jump for details – and Top 10 The Office facts and trivia.

THE OFFICE GETS GLOBAL DEBUT ON iTUNES

New York, NY – October 24, 2011. BBC Worldwide announces that all episodes of The Office are now available to download and purchase in the US for the first time on iTunes (www.itunes.com).

David Brent, the awkward and unnerving boss of the fictional paper merchants Wernham Hogg, first graced televisions back in 2001. The critically acclaimed series written by Ricky Gervais and Stephen Merchant is now celebrating its 10th Anniversary with a wealth of awards, international remakes, and broadcasts around the world. BBC America was the first to air the series in the US market.

To date, video viewing of the seminal British comedy classic has been exclusive to DVD with global brand sales are reaching $4 million to date. From today, The Office Season 1, Season 2, and all the Christmas Specials, will become available for download and purchase from iTunes to own in the US, the UK, Australia, Canada, France, and Germany.

Commenting on the announcement, writer and star of The Office, Ricky Gervais said, “It’s been the most amazing 10 years of my life. Who’d have thought mucking around at work and watching docu-soaps through the 90s would be so lucrative.”

For the past decade, this brilliantly observed and convincingly acted fly-on-the-wall mocumentary has kept us laughing, with all time classic comedy scenes from philosopher David Brent and his acute grasp on political correctness, the long-suffering Tim and engaged receptionist, Dawn, who keep themselves sane by playing childish practical jokes on the insufferable, army-obsessed desk mate Gareth.

Top 10 The Office Facts and Trivia:

1. The Office started life in 1997 as a sketch written by Ricky Gervais called, ‘Seedy Boss’ –he named that Boss David Brent.

2. The Office has been sold by BBC Worldwide to 170 territories in 88 countries – it has been remade in 8.

3. Nearly 4 million copies of The Office have been sold on DVD. To celebrate the 10th Anniversary of The Office: Complete Collection on iTunes features an exclusive 15 minute interview with Ricky Gervais talking about the making of the series.

4. The Office has helped make Ricky Gervais Britain’s most successful comedia, and the only one to appear in Time Magazine’s 100 Most Influential People In The World list.

5. The first scene of The Office ever written was the one where Brent interviews Karen Roper for the job of PA in episode five.

6. The first demo tape of The Office was shot in the real office where Ricky used to work.

7. In the Canadian version of The Office, the main character is named David Gervais.

9. Originally Martin Freeman auditioned for the part of Gareth. Ricky first met Martin when he helped write the series ‘Bruiser’, starring Freeman. He met Mackenzie when they worked together on ‘The 11 O’clock Show’.

10.  The record number of takes for one scene is 74, the scene is when Brent gives Tim an appraisal.