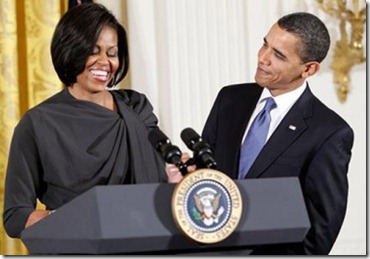 President Barack Obama and First Lady Michelle Obama will visit ABC’s The View on Tuesday, September 25 (11:00 am, ET). It will be their first joint appearance on the daily talk show.

“We are honored to host President Obama and First Lady Michelle Obama on ‘The View,’” said Ms. Walters in making this announcement. “Although each of them has appeared several times on the program, this first joint appearance marks a significant milestone,” she concluded.

President Obama and the First Lady’s interview, scheduled to tape Monday, September 24, will touch on such topics as their relationship, family life inside the White House and the election.

President Obama’s historic visit to “The View” on July 28, 2010, was broadcast on ABC on July 29 and marked the first time a sitting United States President had visited a daytime talk show. His appearance ranks as the show’s most-watched broadcast ever in Total Viewers (6.59 million). This will mark President Obama’s fifth appearance on “The View,” having also been a featured guest in May 2012, March 2008 and November 2004. Mrs. Obama will make her fourth appearance, having previously been a guest in May 2012, April 2011 and June 2008 — when she made her daytime television debut as a special guest co-host.

In 2008-09, the five spirited hosts of ABC’s popular talk and entertainment show, “The View,” left an indelible mark on the political landscape. Whether discussing the day’s political headlines, from the war in Iraq to universal healthcare and teen pregnancy, the latest musings from our nation’s capitol or political infidelities, the outspoken hosts can always be relied on for their unique opinions, quick wit and sparking colorful water cooler conversations that can only be seen, live, exclusively on “The View” (11:00 a.m.-12:00 noon, ET) on the ABC Television Network. In September 2008, the show launched a successful “Red, White & View” campaign highlighting interviews and informational segments that helped promote civic responsibility during the election season. The “Red, White & View” campaign was another example of how “The View” established itself as an important player in the political process.