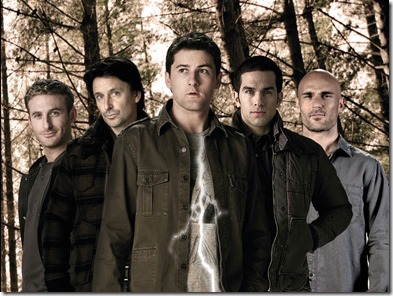 Syfy has picked up New Zealand’s quirky contemporary fantasy series The Almighty Johnsons for US distribution. The series revolves around the Johnsons – brothers who are descended from the Norse Gods – a fun-loving bunch of guys who are as far from being superheroes as you could possibly imagine. Instead, they’re just these guys who love a good time and a having a few with their mates – but, of course, their lives are more complicated than most because, well, Gods…

The 10-episode first season of The Almighty Johnsons will premiere on Syfy in 2014. The press release follows the jump.

The Almighty Johnsons is a production of South Pacific Pictures.

Season 1 of The Almighty Johnsons, consisting of 10 episodes, will premiere on Syfy in 2014.

The action-packed comedy drama The Almighty Johnsons follows the Johnson boys, four typical fun-loving guys – who have inherited the power of Norse Gods. But these four brothers are no flashy superheroes.  Everyday Gods have everyday struggles – searching for love, overcoming sibling rivalry and fulfilling their God-like destiny – while still enjoying a few beers with their mates.

Kelly Martin, CEO, South Pacific Pictures, said: “We are thrilled with the deal that ALL3MEDIA International has done. The Almighty Johnsons will be the first wholly New Zealand originated and produced drama series to be broadcast in the United States, which is a terrific accomplishment and reflects the quality of the series."

Louise Pedersen, Managing Director, ALL3MEDIA International, added: “This acquisition by an influential market such as the United States will be fantastic for the profile of The Almighty Johnsons and New Zealand drama on the global stage.”