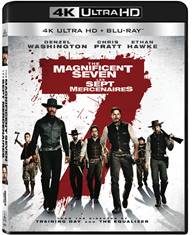 Antoine Fuqua’s remake of the classic western The Magnificent Seven is coming to home video and videophiles will pleased to see that the home video release will include a 4K Ultra HD package.

The story of seven hired guns who contract to protect a small town from an avaricious mining baron features an all-star cast that includes Denzel Washington, Chris Pratt and Ethan Hawke.

The home video release encompasses 4K Ultra HD/Blu-ray Combo Pack, Blu-ray and DVD formats and will be in stores on December 20th. Read on for a more detailed synopsis and list of features for each format.

Exclusive to THE MAGNIFICENT SEVEN Blu-ray is the interactive “Vengeance Mode,” where Denzel Washington, Chris Pratt, Ethan Hawke and the other members of the cast sat down together with director Antoine Fuqua to breakdown key scenes, share their best memories from the set and reflect on the extraordinary experience of making a classic western.  “Vengeance Mode” combines behind-the-scenes footage with the group’s lively conversation to give viewers an all-access look at the process of bringing The Magnificent Seven to the screen. Also available exclusively on the Blu-ray are deleted scenes and two featurettes. “Gunslingers” shows the extensive firearms training the cast went through with the trainer to prepare for the film, while “The Taking of Rose Creek” is a breakdown of the first big shootout.

In Director Antoine Fuqua’s modern vision to a classic story, the desperate townspeople of Rose Creek employ protection from seven outlaws, bounty hunters, gamblers and hired guns after the town falls under the deadly control of industrialist Bartholomew Bogue. As they prepare the town for the violent showdown that they know is coming, these seven mercenaries find themselves fighting for more than money.

THE MAGNIFICENT SEVEN, released theatrically by Metro-Goldwyn-Mayer Pictures and Columbia Pictures, in association with LStar Capital and Village Roadshow Pictures, was directed by Antoine Fuqua from a screenplay by Nic Pizzolatto and Richard Wenk. The film is produced by Roger Birnbaum and Todd Black, and executive produced by Walter Mirisch, Antoine Fuqua, Bruce Berman and Ben Waisbren.

THE MAGNIFICENT SEVEN has a run time of approximately 133 minutes and is rated 14A.