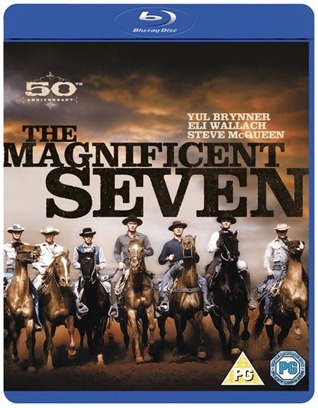 The  The Magnificent Seven, one of the greatest westerns of all time has finally made it to Blu-ray in a beautiful 50th Anniversary print that puts the spit and polish back into this influential movie that spawned a sequel, launched several careers, a TV Series and numerous homages.

There are no complaints with this transfer, it brings the movie back to life without over saturating the colors like some restorations. The colors here are muted and a little drab, but this is a western so I did not expect to see a vibrant color palette. There is no noticeable grain on the picture and everything looks like it was film last year and not 50 years ago. This is the effect a proper restoration effort should have.  Elmer Bernstein’s amazing soundtrack has never sounded better than it does here. The opening theme still stirs the western soul and calls to mind the frontier spirit.

There is a full length Commentary track with Executive Producer Walter Mirisch, cast members Eli Wallach (who played the villain Calvera), and James Coburn. The audio mix on the commentary track sounds a bit wonky and makes it seem like everyone is in a separate location.

The Blu-ray packaging is very simple and standard, I love the poster art on the cover. It comes in a simple single disc case.  The onscreen navigation is simple, straight forward and features nice big easy to read fonts.

Watching these guys tell their stories is odd, no matter how much money or technology is involved the act of film-making really has not changed in 50 years and it constantly amazes me that  ANYTHING gets made.

Believe it or not, this is my first time watching The Magnificent Seven (from beginning to end) and I’m pleased to say it is a movie that holds up surprisingly well and is well deserving of the hype and praise it has received. This 50th Anniversary Edition Blu-ray is worthy of this movie and a must own for Western Fans.