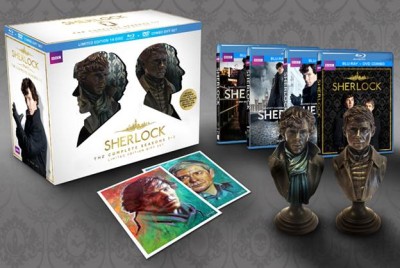 On the heels of Emmy® wins for Benedict Cumberbatch and Martin Freeman comes news that BBC Worldwide will release Sherlock: The Complete Seasons 1-3 on November 4th. This deluxe package will include all nine feature-length episodes of Sherlock to date.

And here is where it gets interesting: the set will include a host of new extra features plus busts of Holmes and Watson and two limited edition art cards. For a complete list of extras, follow the jump.

“This is TV pleasure at its most intense, without even a shade of guilt.”

New York – July 17, 2014 – This holiday season, there is one gift that is sure to be on every Sherlock fan’s wish list: Sherlock: The Complete Seasons 1-3 Limited Edition Gift Set, including a brand new bonus disc that features never-before-seen footage, new commentary from Season Three, and interview footage never before released on disc. Starring Benedict Cumberbatch (The Hobbit films, Star Trek Into Darkness) and Martin Freeman (The Hobbit films, Fargo) as the crime-solving duo of Holmes and Watson, the first ever box set of the Emmy ® Award winning PBS MASTERPIECE series will appear in stores November 4, 2014 from BBC Home Entertainment.

This set includes every episode from all three seasons on both Blu-ray and DVD formats, along with the original bonus features released with each season. Additionally, the set features all new commentaries, never-before-seen outtakes, a deleted scene, and exclusive collectibles including limited edition art cards and busts of Sherlock Holmes and John Watson. This is the ultimate gift set to keep fans guessing until the next game is afoot.

All New Bonus Materials Include:

Sherlock Holmes was always a modern man in an old world. Now he’s back as he should be: edgy, difficult and dangerous, as Benedict Cumberbatch shows him in a new, contemporary light. Sherlock can tell a software designer by his tie and an airline pilot by his thumb. He has a uniquely analytical brain unlike anyone else in the world – a man who staves off boredom by solving crimes. When a chance encounter brings soldier John Watson (Freeman) into Sherlock’s life, it’s apparent the two men couldn’t be more different, but Sherlock’s intellect coupled with John’s pragmatism soon forge an unbreakable alliance. Across three thrilling, scary, action-packed and highly-entertaining seasons, Sherlock and John navigate a maze of cryptic clues and lethal killers to get at the truth. With sparkling scripts and unforgettable performances, this is a contemporary take on the classic Arthur Conan Doyle stories for a new generation. The finale of season three, “His Last Vow,” recently earned seven Primetime Emmy ® Award wins including Outstanding Lead Actor in a Miniseries or Movie for Benedict Cumberbatch, Outstanding Supporting Actor in a Miniseries or Movie for Martin Freeman, and Outstanding Writing for a Miniseries, Movie or Dramatic Special for Steven Moffat.

Sherlock is a Hartswood Films Production for BBC/Cymru Wales co-production with MASTERPIECE.

BBC Worldwide is the main commercial arm and a wholly-owned subsidiary of the British Broadcasting Corporation (BBC). BBC Worldwide Americas brings together all of BBC Worldwide businesses across North and South America. The company exists to maximize the value of the BBC’s assets for the benefit of the UK license payer, and invests in public service programming in return for rights. The company has five core businesses: Channels, Content & Production, Sales & Distribution, Consumer Products and Digital.  Under these businesses fall two key brands in the U.S. – digital cable channel BBC AMERICA and BBC Worldwide Productions, the production arm responsible for the smash hit Dancing with the Stars.