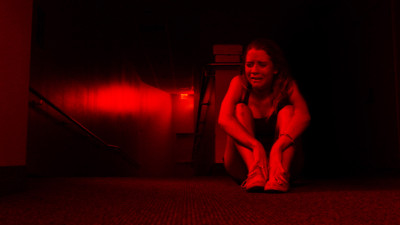 In 1993, a high school production of a play called The Gallows failed to finish its premiere performance when the male lead was accidentally hanged on the stage gallows. Now, the same high school is about to try to perform the play again.

We open on Reese (Reese Mishler) and Pfeifer (Pfeifer Brown) rehearsing a scene that leads into Reese’s character, August, being hanged. The scene is being recorded on Ryan’s (Ryan Shoos) cell phone and accompanied by snide remarks that are not particularly insightful or amusing.

Following rehearsal, we see enough of Ryan’s behavior to understand why he is not universally loved – and enough of Reese to learn that he quit the football team to join the drama club (a decision that does not sit well with his father). Needless to say, Ryan lays it on real thick when he learns that Reese joined the drama club to impress Pfeifer – then persuades him to help destroy the set so he doesn’t further embarrass himself.

Reese, Ryan and Ryan’s girlfriend, Cassie (Cassidy Gifford) return late that night – using a door that never locks (holy contrivance, Batperson!) – and begin their task when, of course, stuph begins to happen. To make matters worse, Pfeifer, who just happened to be driving by and spied Ryan’s car in the parking lot, has stumbled upon them.

Spooked by the aforementioned stuph, the four head to the never locked door to find (dun, Dun, DUN!) it’s locked – or at least they can’t get it open.

Seriously, outside of one successful jump moment that involves absolutely nothing supernatural, the entirety of The Gallows is shallow – wallowing in the most superficial character development, boring set ups and clichéd found footage cinematography.

The connection between Reese and poor, dead Charlie is tenuous at best and if Charlie was really only after him, why would he kill Ryan. Oh, right. Ryan was a douche. Sorry. My bad.

The cast performs, appropriately enough, at a high school drama club level; the direction is dead standard, and the script is so rife with unnecessary cuts and odd angles (but that’s how you can tell it’s found footage, I hear you cry) that making it to the end of the film without contracting a case of vertigo or a migraine is a feat.

As Roger Ebert once noted, ‘No good movie is long enough and no bad movie can be too short’ (or words to that effect). The Gallows is a mere eighty-one minutes in length but felt like it went on for days (I finished my large drink twenty minutes before the credits rolled – never a good sign).

On the other hand, writers/directors Travis Cluff and Chris Lofing now have a feature length film for their resumés – though that is probably the sole good thing I can say about the movie.