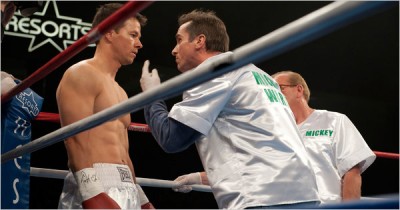 I don’t know what liberties, if any, were taken in translating the story of Irish Mickey Ward to the big screen. I hope there weren’t too many because The Fighter [terrible title, by the way] doesn’t take the exact same path to glory that we’ve seen before.

Mickey [Mark Wahlberg] is a working class stiff who fights professionally, but not outstandingly. As the film begins, he’s lost his last fight and his manager/mother, Alice [Melissa Leo] has lined up another – on HBO, no less. As he trains with his brother, Dickie Eklund [Christian Bale], a crack addict who once boxed sugar ray Leonard – and may have knocked him down – we meet the rest of his family, seven big-haired sisters who have the combined compassion of a hungry hyena. He evens gets the number of a bartender named Charlene [Amy Adams]. She’s cute, tough and definitely a good match for him.

A problem arises when the bout comes up – his opponent has been forced to cancel and he winds up in the ring with a bruiser who has twenty pounds on him and is faster, to boot. He’s so embarrassed that he spends most of his time avoiding everyone – family, friends – and doesn’t call Charlene; who winds up pounding on his door and demanding to know why he hasn’t called!

When Dickie gets himself into a jam with the law – and goes to jail – Mickey begins to see that his career may have been hindered by his family-only management and changes managers. While that royally ticks off his family, who all blame Charlene [who may have had something to do with it], Mickey is getting in shape for his next fight – with a fighter who plans to use him as a stepping stone. And so begins his trip to the championship.

The cool variation comes in the form of his drug-addled brother who believes the film crew that’s following him around is documenting his big comeback – when they’re really making a documentary on the effects of drug addiction and using his name as former contender to add impact.

Naturally, Mickey’s new management don’t want anything to do with Dickie – despite his coming out of jail clean – but when Mick wins his first post-Dickie fight using the plan his brother taught him, we know that, eventually, Dickie will be in his corner again. That is the unique variation that makes The Fighter both entertaining and different.

While there’s been a lot of awards buzz for Melissa Leo and Christian Bale [and deservedly so], both Wahlberg and Adams show us a few unexpected colors, too. Wahlberg has mastered that working class guy that everyone can relate to, but here, he takes that guy into a very desolate emotional place. It’s probably his best performance. Adams can play spunk and determination – we’ve seen plenty of both in other roles – but she exhibits a street sense here that we haven’t seen before. There are moments when Charlene is purely savage, and we haven’t really seen that from Adams before.

Most of the fight sequences are shot in a pedestrian manner. That’s okay because it’s what’s going on in the audience that makes them compelling – well, that and Wahlberg’s lunch bucket approach to the boxing.

The Fighter is as much as about Mickey’s fight to get his career clear of his family as it is about the actual fighting. With his family being the poster family for dysfunction, he has to keep his family ties out of the ring – except for Dickie, who actually knows what he’s doing – because that’s what’s kept him from being what he could be, personally and professionally.

When The Fighter concerns itself with the family, it soars. Each and every member of the Ward family is fighting, frequently at cross purposes, for what they believe in. Charlene is fighting for respect and a man she sees is more than just another guy. Dickie, especially, is fighting – when he gets clean in jail, due to lack of product, he knows that it will take everything he’s got to stay clean in world. There’s a terrific scene where he confronts that battle physically as well as mentally – and it is the heart of the film.

Once everything falls into place, The Fighter loses a bit of steam. Mickey’s championship fight is the least effectively filmed of the movie and feels almost anticlimactic. It’s the Hollywood ending to a movie that has been, up until then, something different, something better.

Full credit, though, to director David O. Russell, who knew that the usual just wasn’t going to be enough to make The Fighter work. Instead, he concentrated on the moments that fall between the usual events of a Hollywood film – with the result that The Fighter is, in fact unique.