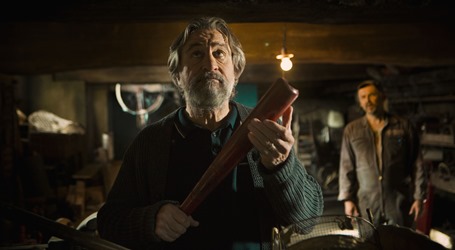 Luc Besson is a master of taking different genres and infusing them with whimsy. With The Family he applies that gift to the mob movie with mostly successful results. Too bad it’s the last fifteen minutes that veer off into a whole ‘nother movie.

The Manzoni family – father Giovanni (Robert DeNiro), mother Maggie (Michelle Pfeiffer), daughter Belle (Dianna Agron) and son Warren (John D’Leo) – have been relocated to France because Papa was a mob boss-turned-snitch and there was nowhere is the U.S. he could have hidden. We meet the newly christened Blake family, Giovanni is now Fred, as they move into their quaint old house in a small town in Normandy, with their dog, but minus their TV (which always seems to happen).

Naturally, the Blake family fits right in: Maggie blows up a supermarket where the clerk is snotty/snarky to her; Belle takes bloody exception to being hit on by a group of idiot classmates; Warren gets beat up by some bullies while figuring out how their new school works – and exacts an appropriate vengeance, and Fred gets in over his head when he tells his new neighbors that he’s a writer (what’s he writing? That would be telling…).

The Family touches on all sorts of themes – first love, bullying, family being everything (even if you have to work at it a bit), environmental issues (!) and more – but at its heart it’s a darkly whimsical, occasionally hilarious assault on mob movie tropes. At least until the last five minutes when – despite a nice twist – it inexplicably goes all Godfather on us.

Some of the film’s best moments are referenced in the trailer but work better in the movie because we see how and why they develop; some of the absolute best moments are new – Fred dragging Stansfield to a town cinema club meeting to talk about a movie that’s supposed to be Some Came Running but, due to a mix up, turns out to be Goodfellas; the family dog’s frequent quizzical looks (this is one baffled pup); Top 10 Reasons Why I Am A Good Guy, and the Blakes’ get-to-know-us barbecue. 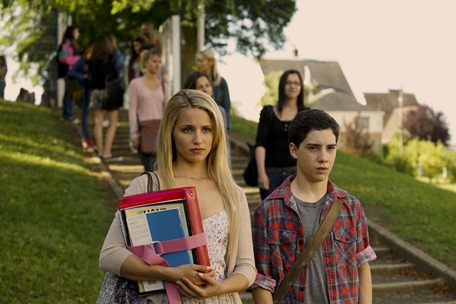 DeNiro and Pfeiffer have terrific chemistry – you can believe they’ve been married for twenty years or more. Agron and D’Leo more than hold their own as mob brats unleashed on an unsuspecting French school. And Jones’ dry underplaying of Stansfield is perfect – he’s hilarious by not being funny.

Besson keeps the movie moving smoothly, working with a script he co-wrote with Michael Caleo (based on an Italian novel by Tonino Benacquista), and it looks like he just might have a classic to add to his credits (along with Leon The Professional, La Femme Nikita and The Fifth Element) – until that last fifteen minutes.

The blood bath that ends the film doesn’t come out of nowhere but, no matter how well it’s choreographed and executed, tonally, it belongs in a deadly serious mob movie – not this previously darkly whimsical black comedy. One of Besson’s biggest problems is that he doesn’t quite know when to stop and by making the climactic sequence as extreme as it is, he completely loses the heart of The Family. What could have been great becomes just a hair better than mediocre. It’s a real shame.