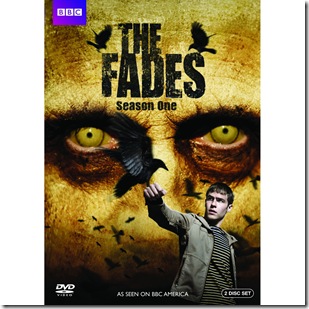 The Fades is a surprisingly witty horror series from the British BBC Three network.

Paul [Iain De Caestecker] is the most unlikely Chosen One in quite a while. He spends most of his time debating which film is the best exploration of trauma ever made [The Jungle Book – Mac makes a compelling case], lusting after girls he could never get to first base with, and generally being, with Mac [Daniel Kaluuya], the most despised kids in school [a genuine achievement, according to Mac].

Their exploration of that abandoned mall gets him shot at just before he sees… something… The man with the gun, Neil [Johnny Harris] is trying to kill that something, but his miscalculation gets his partner, Sarah [Natalie Dormer, The Tudors] badly damaged. The two of them, along with a female vicar named Helen [Daniela Nardini] are Angelics – people who can see spirits, which they call fades, and do other cool stuff [Helen, for example, can heal if the wounds aren’t too bad].

They exist to keep an eye on fades, who exist because the many points on the planet where they could ascend to whatever comes next, have been closing until so few remain that fades are on track to outnumber humans. Worse, Fades can gain the ability to interact with the living by drinking blood and then eating human flesh. That leads to something even worse, but you can find that out from the series.

Paul, it turns out, is a kind of super Angelic – which brings Neil to him. As it happens, Neil is the angelic equivalent of a fundamentalist who has the basic plan of destroying the fades. Sarah is a bit more moderate in her approach, but she shares a propensity for apocalyptic dreams with Paul and has begun to see the end of the world as inevitable.

The six-episode first season of The Fades is a cleverly developed series that brings a core group of characters into contact with unspeakable horror through a series of events that begin as mundane and quickly escalate to evacuate an entire town. The fades are beings that shouldn’t be deadly but turn out to be very much so. Let’s just say that people.

To give the tale an unusual twist, writer Jack Thorne develops in the leader of the fades [Joe Dempsie] a love for another fade, Natalie [Jenn Murray]. He is also capable of making a very rational argument for the fades being the logical replacement for humanity from a purely evolutionary perspective.

Paul is anchored to his life by a family – mother Meg [Claire Rushbrook] and sister Anna [Lily Loveless] – and friends, not the least of which is an unexpected relationship with one his popular sister’s best friends, Jay [Sophie Wu]. He’s idealistic, naïve and, at first, easily taken advantage of. That doesn’t last long, though he somehow manages to take a stand against meaningless slaughter.

One of the best things about The Fades is that it doesn’t insist on being gloomy at all times. There is some sharp humor to leaven the horror [the weekly recaps are a joy!] – and a good bit of the time, the sky is blue. Thorne understands that bad things don’t always happen at night, or in the rain – and directors Farren Blackburn and Tom Shankland do a great job of bringing the scares no matter what the weather or time of day.

Except for short bursts of action, The Fades progresses at a pretty deliberate pace. Tension is then built by layering of character, things happening off-screen or in shadows, score and so forth. Generally, the six episodes have their share of jump moments, but they are earned through developing characters that we can care about. It also helps that we really can’t be sure that everyone will live through the season.

The nature of the fades is such that, even if a character dies, they could be back – and changed…

The first season of The Fades sets up a problem and deals with it. Questions are asked and answered. And then it closes with a scene that throws one last curve…

Being a dark British series, there is some nudity and rough language.

Features: a Deleted Scene from each of the first five episodes; an Extra Scene from each episode; Mac Explains [a series of two/three-minute featurettes in which Mac explains aspects of the series]; Interviews with Johnny Harris and Natalie Dormer; Behind The Scenes featurettes, and Outtakes.

Grade: The Fades: Season One – A