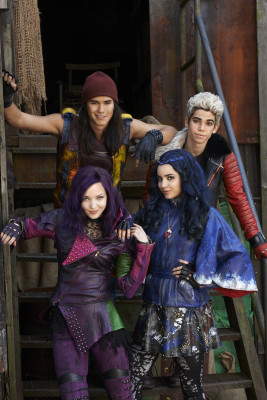 With all the hullaballoo about Sharknado – and all the social media activity – one thing remains true – three Disney Channel movies have kicked the Sharknado Trilogy’s watery behind.

So, while Sharknado 3 boasts its 2.81 million viewers, Disney Channel’s The Descendants (featured the children of four of Disney’s greatest animated villains – Cruella De Vil, Maleficient, Jafar and the Evil queen) quietly racked up 6.6 million viewers – just as the two Teen Beach Movies more than doubled the ratings of Sharknado and Sharknado 2. Follow the jump for the details of the latest no contest.

Disney’s “Descendants,” a modern-day, coming-of-age adventure about the teenage sons and daughters of Disney’s most infamous villains, delivered an enchanting 6.6 million Total Viewers, including 3.0 million Kids 2-11 with its television premiere, Friday, July 31, (8:00 p.m., ET/PT), on Disney Channel, and posted 1.4 million record-setting views on the WATCH Disney Channel app since Friday, July 24. Its soundtrack (also released Friday, July 31 on Walt Disney Records) is currently at #1 on the iTunes soundtrack chart and #2 on the iTunes album chart, and its prequel novel, The Isle of the Lost by Melissa de la Cruz from Disney Publishing Worldwide, maintains its 10-week stronghold at #1 on the New York Times Best Seller List (Children’s Middle Grade).

On Twitter, “Descendants” on Disney Channel was the #1 most social non-sports program on Friday, July 31, as topics from nearly half-a-million users produced over 2 million impressions.

In North America, the movie is also now available on DVD at retailers on iTunes, Amazon and Google Play. Beginning in October, it will be presented on Disney Channels in 162 countries and territories around the world.

Paul Becker (“So You Think You Can Dance Canada”) is the co-choreographer. The script was written by Josann McGibbon and Sara Parriott (creators and Emmy and WGA Award-nominated writers on “The Starter Wife”; writers of “Runaway Bride”), who are also co-producers. Tracy Jeffrey is the producer. Mark Hofeling (“Teen Beach Movie,” “High School Musical”) is the production designer and Kara Saun (“Project Runway”) is the costume designer.