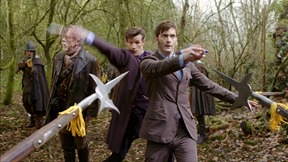 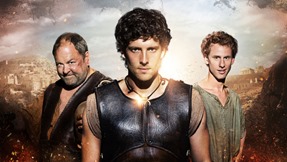 BBC America is a happy network following the premieres of Doctor Who: The Day of the Doctor and Atlantis, Saturday. The Day of the Doctor, the 50th Anniversary special that set The Doctor on a new course was BBC America’s highest-rated performer with three-and-a-half million viewers over the course of the premiere and primetime encore. It also ranked number one on Twitter for the day; was Tumblr’s number one event, ever; set the record for a Fathom Events theatrical events, and set a Guinness World Record for largest ever simulcast for a TV drama.

The debut of Atlantis, a cheerful spear & sandal/scif-fi-fantasy romp based in a re-imagining of Greek myths and legends, garnered the best ever ratings for a Supernatural Saturday premiere – making the day a complete success for the network. Follow the jump for the press release and further details.

#1 TELEVISION EVENT EVER ON TUMBLR

New York – November 25, 2013 – BBC AMERICA’s Doctor Who and new Supernatural Saturday series Atlantis broke records on Saturday, November 23. Doctor Who’s 50th Anniversary special, Doctor Who: The Day of the Doctor, delivered 3.6 million viewers in L+SD for the daytime simulcast and primetime encore.  On Saturday, BBC AMERICA was the #1 cable network on Twitter, Doctor Who was #1 on Twitter in all of television and the series set a record on Tumblr with the highest level of activity of any televised event ever, surpassing the Super Bowl and MTV’s Video Music Awards.

Doctor Who: The Day of The Doctor global simulcast on BBC AMERICA at 2:50pm ET delivered the channel its best telecast ever in L+SD, 2.4 million total viewers and 1.2 million among A25-54. In addition to its premiere on BBC AMERICA, the channel presented sold-out RealD™3D simulcast screenings in eleven cities for eleven Doctors on Saturday.

Doctor Who earned the Guinness World Record for the largest ever simulcast of a TV drama following a massive global campaign which saw the episode broadcast in 94 countries across 6 continents.

“The fan response on-air, in social media and in theaters across the country has been nothing short of incredible.  The 50th Anniversary of this extraordinary program has cemented its iconic status for millions of American viewers and we can’t wait for the Christmas Special,” said Perry Simon, General Manager for BBC AMERICA.

BBC AMERICA’s new fantasy series, Atlantis, delivered the highest rated series premiere ever for Supernatural Saturday with 838,000 total viewers. From the creators of Merlin and Misfits, the 13-part series airing Saturdays at 9:00pm ET, brings to life the vast store of Greek myths and legends re-imagined for a new generation.

Doctor Who’s 50th Anniversary celebration continues tonight (11/25) with BBC AMERICA and NCM Fathom Events presenting RealD™3D screenings in over 660 select movie theaters across the US. Doctor Who: The Day of The Doctor is NCM Fathom Event’s most successful one-night event to date, with record-breaking pre-sales of 175,000+ tickets and the highest web traffic in FathomEvents.com history.  Theaters are sold out across the country from New York to Los Angeles; Chicago to Orlando; and Dallas to Seattle, among many more markets.

· Doctor Who: The Day of The Doctor is the #1 season and episode on iTunes and #1 episode on Amazon’s television chart within 24 hours of release.

· #1 most downloaded episode of 2013 for BBC Worldwide on iTunes (based on first day of sale).

· In social media, BBC AMERICA ranked as the #1 entertainment network in U.S. cable for the week.

· On Tumblr, there were 14.5 million views of BBC AMERICA’s Doctor Who Tumblr on November 23.

· On Twitter, Doctor Who overall generated a total of 1.83 million tweets, topping everything on cable for the week.

· On GetGlue, Doctor Who recorded the most activity ever for a single show smashing the previous record held by Breaking Bad.

BBC AMERICA delivers U.S. audiences high-quality, innovative and intelligent programming. Established in 1998, it has been the launch pad for talent embraced by American mainstream pop culture, including Ricky Gervais, Gordon Ramsay, Graham Norton, and successful programming formats including ground-breaking non-scripted television like Top Gear and top-rated science-fiction like Doctor Who. Owned by BBC Worldwide, the commercial arm of the BBC, BBC AMERICA has attracted both critical acclaim and major awards including two Emmy® Awards, five Golden Globes® and ten Peabody Awards. The channel attracts one of cable’s most affluent and educated audiences and is available on cable and satellite TV in 80 million homes. It broadcasts in both standard and high-definition, with content available On Demand across all major digital platforms. Online, www.bbcamerica.com is the place to go to dig deeper into pop culture with a British twist. Find out more by visiting www.press.bbcamerica.com or follow us on www.twitter.com/bbcamerica.