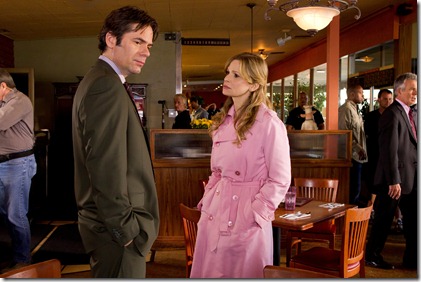 Tonight brings us the first of the final six episodes of The Closer (TNT, Mondays, 9/8C). With the end in sight, it’s clear that Deputy Chief Brenda Leigh Johnson of the Major Crimes Unit will be going out on her own terms.

TNT provided me with four of The Closer’s final six episodes for review. Each of the four episodes is a solid hour’s entertainment with Kyra Sedgwick doing her usual brilliant job as the LAPD’s top confession getter. The usual gang of supporting players continues to shine as they add colors to the characters they have developed over the show’s seven seasons.

The character writing is as solid as ever, though the weekly cases still (with one notable exception) manage to not quite be as involving. The episodes move along at a good pace and manage to include good bits for everyone – but it is Deputy Chief Johnson’s final hurrah, so they are focused on building to an appropriate finale for her.

In terms of the episodes, tonight’s premiere, Hostile Witness, revolves around a rape/murder that brings Philip Stroh (Billy Burke) back – once again with a much less intelligent and wily partner in crime – which means that Johnson is once more so focused on him that it interferes with her doing the job.

Episode Two, Drug Fiend, deals with the murder of an oncologist whose patients never seem to show signs of their chemotherapy, and sets up the return of Johnson’s parents (Barry Corbin and Frances Sternhagen). Her father’s health is an issue.

In Last Rites, Major Crimes has to investigate the murder of a Catholic priest – who just might be a pedophile – while Johnson and husband Fritz (Jon Tenney) host her parents, who are in town to find a better doctor.

Finally, Armed Response plays on the Treyvon Martin murder – only the victim is a security guard and the suspects are a disheveled young man and his underage girlfriend. And, oh, yeah, the identity of the department’s leak is revealed – and it’s a stunner!

Over the course of seven seasons, Brenda Leigh Johnson has been one of the most fascinating characters on TV. She’s tough as nails but as thoroughly feminine as Barbie. Her ability to get people to confess to major crimes is legendary, and her support of her team has always been rock solid.

The Closer’s final episodes – though leading up to Johnson’s departure in the foreground – also quietly begin to both emphasize and humanize Internal Affairs’ Captain Sharon Raydor (Mary McDonnell), who will be the lead character in the sequel series, Major Crimes (which premieres not long after The Closer concludes).

Plus, of course, there is the lingering spectre of the lawsuit that hung over Johnson’s head last season – which has led to a new situation in the unit: a watchdog. Instigated by Asst. Chief Pope (J.K. Simmons), the new policy is that an assistant DA must keep an eye on proceedings – but not for the reason that everyone will be expecting.

All in all, then, there are a lot of balls to be juggled in the final season of The Closer, and through the first four episodes at least, they are all being kept nicely in the air.

Photo by Karen Neal/Courtesy of TNT