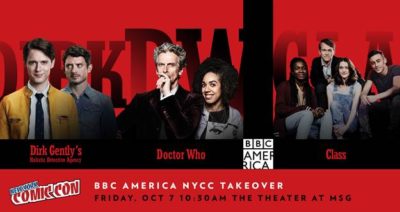 The Doctor will be in at New York Comic-Con 2016 – and he’s bring friends. BBC America will host panels for Doctor Who, Doctor Eho spin-off Class, and Dirk Gently’s Holistic Detective Agency at the Con – which runs from October 6-9.

Whovians will meet new Companions Pearl Mackie (Bill) and Matt Lucas (Nardole) – and get a sneak peek at what lies ahead for Peter Capaldi’s Doctor.

The first ever Class Panel includes stars Greg Austin, Fady Elsayed, Sophie Hopkins and Vivian Oparah along with Patrick Ness and Brian Minchin. A discussion will follow a sneak peek.

New York – September 23, 2016 – Announced today, BBC AMERICA will kick off New York Comic Con’s first ever panels presented at The Theater at Madison Square Garden on Friday, October 7 at 10:30am. The BBC AMERICA Takeover features panels and a world premiere screening with the casts and creators of Doctor Who, new original series Dirk Gently’s Holistic Detective Agency and new Doctor Who spin-off, Class.

“New York Comic Con brings an electric fan fueled energy to New York City,” said Sarah Barnett, President of BBC AMERICA.” “We’re excited to launch its expansion to The Theater at Madison Square Garden with a packed BBCA block with a lot of firsts – from first ever panel line-ups, exclusive footage and behind-the-scenes glimpses for both Doctor Who and Class, to the world premiere screening of our next original series Dirk Gently’s Holistic Detective Agency.”

BBC AMERICA’s award-winning Doctor Who star Peter Capaldi will make his New York Comic Con debut along with the first ever fan appearance by new co-star Pearl Mackie, who joins the series as Bill, the Doctor’s new companion, and award-winning actor and comedian Matt Lucas, who’s set to return as Nardole. Fans will get an exclusive sneak peek of what’s ahead including the upcoming Christmas Special this December on BBC AMERICA. Panel includes stars Peter Capaldi (The Thick of It, The Hour), Pearl Mackie (The Curious Incident of the Dog in the Night Time), Matt Lucas (Bridesmaids, Little Britain) as well as lead writer and executive producer Steven Moffat (Sherlock) and executive producer Brian Minchin (Class, Torchwood). Doctor Who is a BBC Cymru Wales production for BBC One and a BBC AMERICA co-production. Doctor Who returns with a new Christmas Special in December and a new season in Spring 2017.

From the studio that brought you The Walking Dead, BBC AMERICA’s next original series Dirk Gently’s Holistic Detective Agency is an adaptation of the wildly popular novels from Douglas Adams (The Hitchhiker’s Guide to the Galaxy, Doctor Who).

Welcome to the world of BBC AMERICA’s Dirk Gently’s Holistic Detective Agency; a trippy mystery that thrusts a reluctant sidekick into the bizarre world of an unconventional detective who believes in the interconnectedness of all things.  When washed-up rocker Todd Brotzman (Elijah Wood) stumbles upon the murder scene of a millionaire, all hell breaks loose. Eccentric detective, Dirk Gently (Samuel Barnett), wholly believes they’re destined to untangle the peculiar events surrounding the mystery together, whether Todd likes it or not! A collection of wild and dangerous characters’ further infiltrate and complicate their world, each episode landing them a few random steps closer to uncovering the truth.

BBC AMERICA presents the first ever panel and sneak peek of new series Class, the Doctor Who spin-off, set in Shoreditch, London. The new BBC AMERICA co-production is from award-winning YA writer, Class creator and executive producer, Patrick Ness (A Monster Calls), and is executive produced by the team behind Doctor Who, Steven Moffat and Brian Minchin.

Four Coal Hill School students who have hidden secrets and desires, navigate a life of friends, parents, school work, sex, sorrow – and possibly the end of existence. Coal Hill School has been a part of the Doctor Who universe since the very beginning, but that has come at a price. Time travelling over the years has caused the very walls of space and time to become thin. There’s something pressing in on the other side, something waiting for its chance to kill everyone and everything, to bring us all into Shadow. Panel includes stars Greg Austin, Fady Elsayed, Sophie Hopkins and Vivian Oparah along with Patrick Ness and Brian Minchin. Class is a BBC Studios Wales production, co-produced with BBC AMERICA and BBC Worldwide. Class will premiere alongside Doctor Who in Spring 2017 on BBC AMERICA.