Steven Spielberg’s first film with Disney, The BFG, features three brilliant performances and a horde of delightful visuals that are dulled more than a little by the film’s tendency to meander – dropping the pace to sluggish.

The film opens with Sophie (Ruby Barnhill) wandering the halls of the Orphanage at three in the morning, followed by an orange tabby: locking the front doors; sorting a pile of mail and chastising a quartet of drunks who are making too much noise.

We know instantly that she not the sort to be trifled with.

Through pure bad luck, she sees a giant (Mark Rylance) sneaking through the town – and he sees her seeing him. Despite hurrying back to bed and hiding under the covers, Sophie finds herself plucked from the Orphanage and carried away to Giant Country. 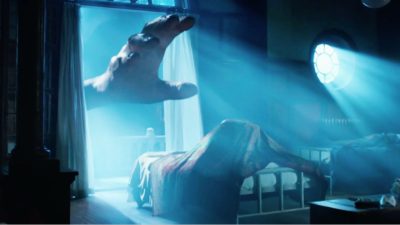 Fortunately for her, the giant who snatched her (and mentions that he’s been called the Big Friendly Giant) is not a ‘cannyabal’ like the other giants in the area.

Despite her efforts to run away and return home, the giant manages to forestall her – it would be terrible if she were to return home and tell everyone that she’s seen a giant (though she rightly points out that no one would believe her).

Unfortunately, the other giants come to suspect that BFG has a human bean in his home and to save her life he returns her to her home, but by now she’s determined to stay.

Eventually, the pair must enlist the aid of The Queenie (Penelope Wilton) – leading to sequences in Buckingham Palace (the film’s best moments).

In between there are some magnificent CGI effects that are part of scenes that hinder the film’s narrative (frankly, narrative structure is decidedly lacking here), and the attempt to make the cannibal giants menacing comes off more like bad Three Stooges material – the darkness of the book is forsaken almost entirely (except for one nightmare sequence built around an actual nightmare). 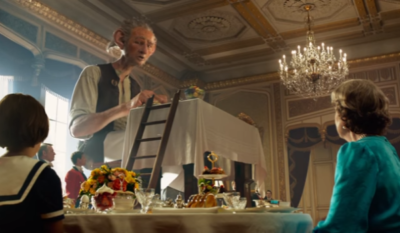 The bits that work brilliantly do outnumber the bits that fizzle or distract from the narrative – but not by nearly enough.

Another plus is the detail – the Rube Goldberg devices and crafty contraptions that fill BFG’s cave home, for example, are a delight – and put to good use.

The design for BFG and the other giants is also pretty spiffy – though only Rylance manages to give his motion capture performance believability. It’s the combination of his gravitas and tendency to speak in semi-gibberish that provides the film with its grounding.

Barnhill is extremely good as the determined Sophie and Wilton’s Queen is a joy (The BFG may be remembered for having the best fart gag featuring the queen).

In very brief roles, Rafe Spall (Mr. Tibbs, the queen’s factotum) and Rebecca Hall (Mary, the queen’s lady-in-waiting) are also terrific – as are various actor’s in the roles of various generals and courtiers.

Sadly, between the film’s sluggish pacing and buffoonish villains, The BFG just barely scrapes into watchability.