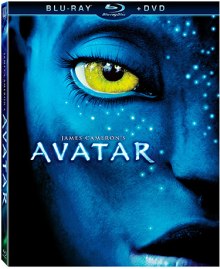 Avatar made over $2 billion at the box office but that’s not good enough for James Cameron and the people at Fox. As predicted the stripped down Home Video debut of Avatar in April will be followed up by a beefed up Special Edition in November and the 3D Version of the film sometime next year. So that’s already three planned Home Video releases for a movie that’s all sizzle and no steak. The April release will include a special code that will let users view Bonus Content online – which is incredibly dumb and in honor of earth day you can get a virtual tree. How encouraging people to play with Virtual Trees instead of planting real ones is beyond me, but then hey that’s the entire point of Avatar where everything was fake. Not only that but isn’t producing 3 separate releases worse for the environment than just waiting and giving us one decent version?  If you want to be even more cynical check out the self aggrandizing press release after the break.

The ultimate high definition experience for home viewing audiences, AVATAR will be available on Blu-ray and DVD everywhere in the United States and Canada on Earth Day, April 22. Internationally, the roll out begins April 21 ending May 6. An ultimate edition release with immersive bonus materials is slated for November. Connecting the two releases in April and November is “The Avatar Program,” an interactive consumer experience that offers an online hub for exclusive content, discounts and more.

An action-adventure journey of self-discovery, AVATAR dramatically demonstrates how human invasion almost destroys the balance of life on the planet of Pandora. The audience passionately roots for Pandora’s survival, everyone learns that all living beings are connected and that those who seek to exploit nature rather than respect it will only destroy themselves. Taking that message of conservation and ecological harmony, the studio and Earth Day Network, together with various organizations worldwide, will pledge to plant one million trees across the globe by the end of 2010.

“We wanted the best presentation of any film in the history of the Blu-ray and DVD formats,” said AVATAR producer Jon Landau. “Our launch into the home in April will allow fans to return to Pandora again and again.”

Through a unique code found inside the AVATAR Blu-ray/DVD, consumers can register at www.avatarmovie.com into “The AVATAR Program” and gain exclusive access to first-look bonus materials, special content, money saving offers and much more. Additionally, only those fans will be able to adopt one of the one million trees being planted on behalf of Earth Day and receive a virtual hometree they can locate on a map to see where it’s actually planted.

Other AVATAR digital initiatives include:

* “Pandorama” – Via a computer’s webcam users can immerse themselves into the world of Pandora, inserting themselves into different locations from the movie and interacting with the elements in each; users can snap postcards and share amongst friends only at www.pandorama.avatarmovie.com
* “Pandorapedia” – The official guide to the world of Pandora and James Cameron’s AVATAR, fans enter a world beyond imagination with hundreds of facts on Pandora that can be accessed online at www.pandorapedia.com
* “Immersive Trailer” – The first-ever interactive trailer allows fans to click on any part of the video to explore detail frame-by-frame and in-context “hot spots” that will offer meticulous information on characters, locations and more
* “Interactive Desktop Wallpaper” – Instant access to all things AVATAR including newsfeeds, videos, social network updates and exclusive content that is updated automatically right on your desktop

Earth Day Network will spearhead the initiative and collaborate with its international partners to plant one million trees, indigenous to each region in 15 different countries, by the end of 2010. The organization is committed to caring for and nurturing the trees to maturity, as well as considering natural disasters such as fires and landslides during the planting process.

“I am pleased to have the opportunity to share the environmental messages from AVATAR through the efforts during the 40th Anniversary of Earth Day and with Earth Day Network,” said James Cameron. “Earth Day Network’s commitment and actions to promote a healthy, sustainable planet go hand-in-hand with the themes of AVATAR.”

“AVATAR sends a universal message about the danger of exploiting our natural resources and brings to the forefront of the global consciousness the need to protect our planet and humanity, said Kathleen Rogers, President, Earth Day Network. “We hope this commitment from Twentieth Century Fox Home Entertainment to plant one million trees, will inspire others to stand up against climate change for Earth Day.”

The Oscar® and Golden Globe® winning epic is the highest grossing film of all time, taking in over $2.6 billion in worldwide box office. Director James Cameron takes audiences to a spectacular world beyond imagination, where a reluctant hero embarks on a journey of redemption and discovery as he leads a heroic battle to save a civilization. AVATAR delivers a fully immersive cinematic experience of a new kind, where the revolutionary technology invented to make the film disappears into the emotion of the characters and the epic nature of the story.

The AVATAR Blu-ray Disc and DVD will be available around the world as follows: