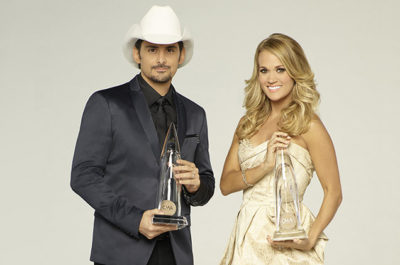 The 50th Annual CMA Awards will, once again, be hosted by Brad Paisley and Carrie Underwood (it’s turning into a steady gig for them!).

Between the pair they have 20 CMA Awards, so with that and hosting several times, they have to be among the most comfortable awards show hosts around.

The CMA Awards honor the best in country music as voted on by their peers. ABC will broadcast the 50th Annual CMA Awards live from Nashville on Wednesday, November 2nd (8/7C). For more, follow the jump.

Country superstars Brad Paisley and Carrie Underwood will be returning to host Country Music’s Biggest Night in 2016. “The 50th Annual CMA Awards” airs live from the Bridgestone Arena in Nashville on WEDNESDAY, NOVEMBER 2 (8:00-11:00 p.m. EDT), on the ABC Television Network.

The return of the popular pair was announced during Paisley’s appearance on “Jimmy Kimmel Live!” and via Underwood’s social network. The follow-up CMA social announcement included a video highlight reel of the first 50 years of CMA Awards moments.

“This is a milestone year for the CMA Awards as we celebrate our 50th Anniversary and the broadcast is in great hands with Brad and Carrie,” said Sarah Trahern, CMA chief executive officer. “They are genuinely invested in the ongoing success of the CMA Awards, but they are equally committed to honoring the traditions that are the foundation of Country Music’s Biggest Night.”

“I really enjoy hosting the CMA Awards with Brad,” said Underwood. “Of course we have fun up there, but we take the responsibility of honoring the best artists in the format and shining a positive light on Country Music very seriously. And this year, the bar will be even higher as we celebrate the 50th Anniversary of the CMA Awards. I can’t wait.”

“I look forward to hosting the CMA Awards each year,” said Paisley. “Carrie and I have certainly hit our stride in terms of balancing humor and a genuine respect for the nominees and winners. This year the stakes are higher than ever as we honor the legacy and traditions of the past 50 years. We will give it everything we’ve got.”

Paisley is a critically acclaimed singer, songwriter, guitarist, and entertainer whose talents have earned him numerous awards, including three Grammys. He has been a proud member of the  GrandOle Opry since 2001. Paisley has written 20 of his 23 No. 1 singles with the first being his 1999 hit “He Didn’t Have To Be” and his most recent, “Perfect Storm,” from his chart-topping 2014 album Moonshine in the Trunk. Paisley’s current single is “Without A Fight,” featuring multi-Platinum artist Demi Lovato, and is currently No. 27 on the Billboard Country Airplay chart and was Paisley’s biggest radio add day of his career. His 2016 “Life Amplified World Tour” kicked off on May 19 and will travel across the U.S. and Canada this summer, with more dates to be added. Paisley has partnered with Boot Barn and developed an exclusive line of jeans, hats, T-shirts, jewelry, belts and woven shirts called Moonshine Spirit by Brad Paisley. Connect with Brad at www.BradPaisley.com, www.Facebook.com/BradPaisley, on Twitter @BradPaisley, on Instagram @Brad Paisley, and YouTube at YouTube.com/BradPaisley.

Underwood emerged from the promise of her 2005 “American Idol” win to become a true multi- format, multi-media superstar, spanning achievements in music, television, and film. A seven-time  Grammy Award winner, she has amassed more than 100 major honors, sold 58 million records  worldwide, and recorded 23 No. 1 singles (13 of which she co-wrote), with a catalog of songs that  have been streamed more than 1.5 billion times worldwide. Underwood was recognized as Pollstar’s top female Country touring artist for her headlining tours in 2008, 2010, and 2012. Her first four studio albums, “Some Hearts,” “Carnival Ride,” “Play On,” and “Blown Away” – each certified multi-Platinum or Platinum – have tallied an incredible 38 weeks at No. 1 on Billboard’s Top Country Albums chart. In 2013, Underwood starred as Maria von Trapp in NBC’s three-hour holiday blockbuster, the Emmy-winning “The Sound of Music Live!,” whose airings attracted 44 million viewers. In December of 2014, the Grand Ole Opry member released her first hits collection, Greatest Hits: Decade #1. Billboard’s best-selling hits album of 2015, the chart-topping package was certified Platinum in January of 2016, making Underwood the only Country artist – and one of only six all genre artists – to launch an album to Platinum success since the time of its release in December of 2014.  Celebrating her first 10 years of music, the collection’s 25 songs included two new No. 1 hits co-written by Underwood: the Platinum-certified, Grammy-winning “Something in the Water,” as  well as the Gold-certified “Little Toy Guns.” In 2015, she began her third season as the voice of primetime television’s No. 1 program, “Sunday Night Football.” Underwood’s current single, “Church Bells,” is quickly climbing the charts, following the No. 1 successes of “Smoke Break” and “Heartbeat,” all from her chart-topping, Gold-certified fifth studio album, Storyteller. For more visit CarrieUnderwoodOfficial.com and follow her on Twitter @CarrieUnderwood; on Instagram at  Instagram.com/CarrieUnderwood; Facebook at facebook.com/CarrieUnderwood; and YouTube at youtube.com/CarrieUnderwoodVEVO.

The 2016 CMA Awards nominees and winners are determined by more than 7,300 professional  members of CMA, which was the first trade organization formed to promote an individual genre of  music in 1958. The eligibility period for the 2016 CMA Awards is July 1, 2015 to June 30, 2016.

The first “CMA Awards Banquet and Show” was held in 1967. The following year, the CMA Awards was broadcast on television for the first time – making it the longest running, annual music awards program on network TV. The CMA Awards have aired on ABC since 2006. ABC will be the network home of the CMA Awards and CMA’s other two television properties, “CMA Music Festival: Country’s Night to Rock” and “CMA Country Christmas,” through 2021.

Ticket information for the CMA Awards will be announced later this summer with information  available at CMAawards50.com. Or follow the conversation on Twitter at #CMAawards50.

“The 50th Annual CMA Awards” is a production of the Country Music Association. Robert Deaton is the executive producer and Paul Miller is the director. The CMA Awards will be shot in high definition and broadcast in 720 Progressive (720P), ABC’s selected HDTV format, with 5.1 channel surround sound.

A high-resolution, downloadable 2016 CMA Awards logo and photography from the 2015 CMA Awards is available at CMApress.com. The site is password protected for media use only. Credentialing for the 2016 CMA Awards will launch later this summer. Keep up to date with the latest CMA news by following us on Twitter at www.twitter.com/CMAcloseup.