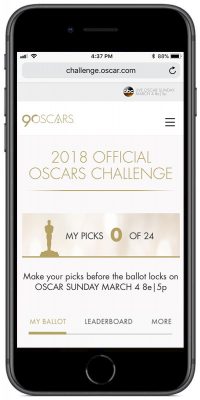 The annual Oscars® Challenge is now live at Oscar.com.

Choose the films you think will win the 24 Oscars® categories and win a trip for two to Hollywood for next year’s 2019 Oscars Red Carpet fan experience.

The 90th Oscars will be held on Sunday, March 4, at the Dolby Theatre® at Hollywood & Highland Center® in Hollywood, and will be broadcast live on The ABC Television Network at 8:00 p.m. EST/5:00 p.m. PST – hosted by Jimmy Kimmel.

Movie fans can visit Oscar.com to fill out their official Oscars ballot and can also enter The Official Oscars Challenge Sweepstakes for a chance to win a grand prize trip for two to Hollywood for next year’s 2019 Oscars Red Carpet fan experience.

The Official Oscars Challenge gives Oscar fans an opportunity to predict winners in the 24 categories and also challenge their Facebook friends to play along. Eligible fans can also submit their ballots for a chance to win exclusive prizes including:

• Grand Prize Winner: Trip for two to Hollywood – including two nights’ hotel stay and airfare – to join the fans in the bleachers for the red carpet arrivals for next year’s 91st Academy Awards®.

• Runner-Up: Three-day/two-night trip for two to Los Angeles, California, to attend a red carpet premiere of Marvel Studios’ “Avengers: Infinity War” prior to its release on May 4, 2018. An unprecedented cinematic journey ten years in the making and spanning the entire Marvel Cinematic Universe, Marvel Studios’ “Avengers: Infinity War” brings to the screen the ultimate, deadliest showdown of all time. The Avengers and their Super Hero allies must be willing to sacrifice all in an attempt to defeat the powerful Thanos before his blitz of devastation and ruin puts an end to the universe.

• First Prize Winners: Oscar Prize Pack that consists of a Blu-ray of the winning film that corresponds to the award category from which the First Prize winner was selected, and, an official “The Oscars” sweatshirt.

Fans can make and edit their picks and enter the sweepstakes up until 5:00 p.m. PST on March 4, 2018. The Official Oscars Challenge sweepstakes is open only to legal residents of the 50 U.S. and D.C., 18 or older. No purchase necessary. For complete official rules and details, click here.

Oscar.com is the official digital destination for all things The Oscars, including the year’s nominees, breaking news, The Official Oscars Challenge and “The Oscars: All Access,” which is a behind-the-scenes live stream featuring footage from over 20 cameras strategically placed along the red carpet and backstage. This year to commemorate the 90th presentation, Oscar.com is also featuring 90 Stories from 90 Years in partnership with Rolex, an online hub containing a treasure trove of moments, stories and facts from across 90 years of Oscar movie history. From the very first “The Oscars” opening performance, Hattie McDaniels’ historic night and Sacheen Littlefeather refusing the Best Actor award on behalf of Marlon Brando to Viola Davis’ unforgettable 2016 acceptance speech, fans can relive some of the most iconic moments in The Oscars’ history.

The 90th Oscars will be held on Sunday, March 4, at the Dolby Theatre® at Hollywood & Highland Center® in Hollywood, and will be broadcast live on The ABC Television Network at 8:00 p.m. EST/5:00 p.m. PST. The Oscars, produced by Michael De Luca and Jennifer Todd and hosted by Jimmy Kimmel, also will be televised live in more than 225 countries and territories worldwide. Additionally, “The Oscars: All Access” live stream from the red carpet and backstage will begin at 6:30 p.m. EST/3:30 p.m. PST on Oscar.com.