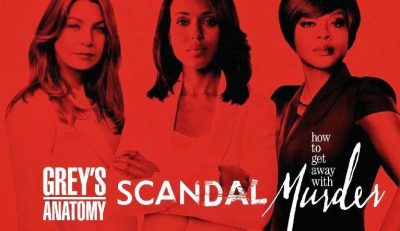 ABC’s TGIT line-up – Grey’s Anatomy, Scandal and How to Get Away with Murder – has received a blanket renewal for another season.

Next season will be the 14th for Grey’s Anatomy; the 7th for Scandal, and the fourth of How to Get Away with Murder.

ABC Picks Up Triple Threat Lineup — ‘Grey’s Anatomy,’ ‘Scandal’ And ‘How To Get Away With Murder’ – For Another TGIT Season

ABC’s hit TGIT series – “Grey’s Anatomy, “Scandal,” and “How to Get Away with Murder” – have each been picked up for another season. It was announced today by Channing Dungey, president, ABC Entertainment.

“’Grey’s Anatomy,’ ‘Scandal’ and ‘How to Get Away with Murder’ continue to keep viewers on the edge of their seats and wanting more. I’m thrilled to bring back these shows and the OMG moments that come with them,” said Dungey.

“Grey’s Anatomy,” “Scandal” and “How to Get Away with Murder” have proved to be a stellar combination for the network since the January return of the three shows from Shondaland’s Shonda Rhimes and Betsy Beers. All three shows are produced by ABC Studios.

The return of TGIT on January 26 drove ABC to Thursday season highs and made it the No. 1 network each week since the return, among Adults 18-49.

“Scandal” premiered with its biggest audience in over 14 months and its best young adult number since its midseason return last February – since 11/19/15 and 2/11/16, respectively. Since its season opener, “Scandal” has finished a strong No. 1 in its hour on all 3 telecasts among Adults 18-49. Ranking No. 1 in its hour on all 3 weeks this season among Adults 18-49, “Scandal” has won its hour by double-digits on each telecast over its nearest competition.

Recipient of the 2007 Golden Globe Award for Best Drama Television Series and nominated for multiple Emmys, including Outstanding Drama Series, “Grey’s Anatomy” is considered one of the great television shows of our time. The high-intensity medical drama, follows Meredith Grey and the team of doctors at Grey Sloan Memorial who are faced with life-or-death decisions on a daily basis. They seek comfort from one another, and, at times, more than just friendship. Together they discover that neither medicine nor relationships can be defined in black and white.

Everyone has secrets, and Olivia Pope has dedicated her life to protecting and defending the public images of the nation’s elite by keeping those secrets under wraps. Pope’s team is at the top of its game when it comes to getting the job done for its clients, but it becomes apparent that these “gladiators in suits,” who specialize in fixing the lives of other people, have trouble fixing those closest at hand – their own.

HOW TO GET AWAY WITH MURDER

Murder, deception, fear and guilt are the ties that bind Middleton University Professor Annalise Keating (Viola Davis) to her long-time associates Frank Delfino, Bonnie Winterbottom and her students. But as the group struggles to move on with their lives following Wes’ death, their past continues to haunt them. Relationships will be fractured, lies will spin out of control, and a shocking, new mystery will upend their entire lives.