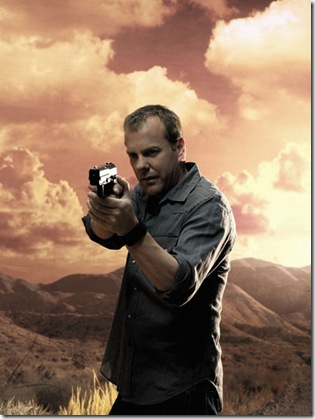 This will be the last 24 hours/season for Jack Bauer. The modern-day MacGyver and terrorist fighter has gotten his burn notice from Fox Television – the victim of a confluence of factors: rising costs, creative stumbles and descending ratings.

While a movie is in the planning stages, and Bauer’s adventures are such that they really don’t need to be tied to the [kinda] real time format of the series, I’m sad to see it go because it gave us a fictional philosophical debate on the ways and means that could/should be used in defence of one’s country – and placed it squarely in the middle of a fast-paced, frequently shocking and very entertaining package.

Plus, it gave us a world, however heightened, in which people weren’t always what they seemed: friends could be traitors and enemies could be patriots; characters died – even [or maybe especially] the ones we really liked [with the exception of Bauer – which may have been a mistake], and where characters who survived frequently grew from their experiences [as when dumber-than-a-post Kim Bauer grew up and became a computer wizard for the CTU]. Heck, even the President of the United States could be a traitor!

In 24, we got philosophy, character growth, action and stuff getting blowed up real good – not to mention conspiracies, sacrifice and, occasionally, Commando Chloe. And now we’re down to the show’s final tick…tick…tick…

One thought on “TELEVISION: Time Runs Out For 24!”