Even more than its parent series, Stargate SG-1, Stargate Atlantis has embraced the fluidity of life. Every season has had some kind of major change. By now, most Atlantis fans know of the change in command that’s coming to the returning series [Fridays, Sci Fi, 10/C], in tomorrow’s season premiere – which kind of spoils the surprise of the ep’s final seconds. Fortunately, with all the various instances of cliffhanging peril to be resolved, there’s plenty of opportunity to be surprised before then.

Search and Rescue finds members of the Atlantis team buried under tons of rubble from Michael’s imploded compound; Teyla [Rachel Luttrell] about ready to give birth on Michael’s [Connor Trinneer] flagship; and the city itself, for a change, is fine… 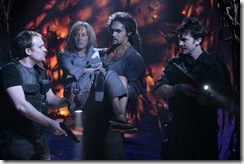 With all the action and mayhem in Stargate Atlantis’ fifth-season premiere, the scariest image of all might just be midwife Rodney [David Hewlett]. That’s right. Rodney McKay is the only one with Teyla when the baby decides to make its debut. That is more unsettling than earlier scenes with Rodney and Lorne [Kavan Smith] buried under Michael’s compound, or Sheppard [Joe Flanigan] and Ronon [Jason Momoa] about to be pulled from the rubble by members of Michael’s crew – or even a badly injured Sheppard leading the mission to save Teyla when what he really needs is surgery and a transfusion.

To say that Search and Rescue is another entertaining Atlantis episode is to understate the situation. Writer Martin Gero has produced an ep with space battles, hand-to-hand combat, exploding hyperdrives, lots of weapons fire and even a few more moments where Rodney’s spine solidifies briefly. Veteran Atlantis director Andy Mikita keeps things moving at a [mostly] breakneck pace – making certain implausiblities virtually unnoticeable. Combined with sharply observed performances, the result is definitely a lot of fun.