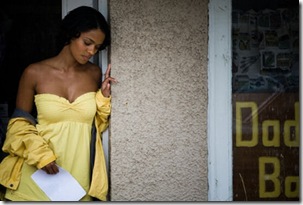 Children of the Corn is one of those film franchises that make one wonder. Why would such a boring movie spawn so many, equally boring, sequels? Now we have a TV-movie version that hews more closely to the King short story and I have to ask again, why would anyone make this?

What is creepy and atmospheric and, yes, scary, as a prose piece is simply not substantial enough to support a ninety-minute movie [which, after you subtract the commercials, is what this is]. Sure there are some great atmospheric shots of sunsets and the night skies from inside the rows of corn. There are also some great prosthetics and bodies. David Anders and Kandyse McClure also act the heck out of their roles – quite a feat when one considers that they don’t really have much to say, even when events overtake them.

Children of the Corn might work as a short feature – say forty-five minutes – but both the original and the Syfy version spend way too much time following the characters as they pound through the rows of the corn. Which is to say that even though this version stays much closer to the prose original, there’s far too much padding – and to accommodate the padding required to fill out a movie, the pacing is something less than deliberate.

If you speed up all the scenes in the corn, Children of the Corn comes in at something shy of an hour. Which is a shame because the key performances – Anders, McClure, Daniel Newman [the rebellious Malachi] and Preston Bailey [kid preacher/boy prophet] – are extremely good.

Syfy’s Children of the Corn is both better and creepier than the first movie in that lamentable franchise, but that’s not really saying a lot.