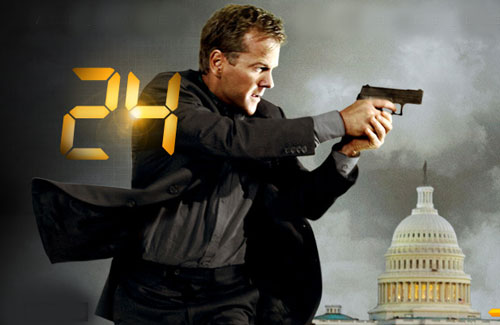 Wow, how did 24 Season 7 end up like this? This was the first season in several years where I was really addicted to 24 and watched it weekly – normally, I’ll either DVR 10 episode blocks or wait for the DVDs but this season was rocking in the beginning until a disturbing pattern formed and that’s the 3 -4 episode arc style of story telling. Every time the show built momentum they caught the bad guy and it was “Oh, I’m just a small fry here…” Then the show introduced new characters and built up all over again, it became a little jarring and disjointed. But I was still hooked.

The show went off the rails around hour 18 when they revealed Tony to really be a bad guy and Jack got dosed with the virus. The show sort of went into free fall from there because then it focused on the President’s daughter who is no Sheri Palmer. She came across as a bush league lightweight, but then again so did President Allison Taylor (Cherry Jones) and her weird “pursed,” lips whenever she was “vexed.”  Almost everything involving the President this season brought things to a halt. Her entire arc was pretty ridiculous but it still somehow worked for me.

Monday’s season Finale was a big let down, it felt slow and anti-climatic. Especially since they essentially wrapped up the season last week, it seemed like the writers wanted to start a whole new 3 or 4 part arc, but realized, “oops, we only have 2 more hours.” There was too much time spent with Kim and when Tony’s true goals were revealed it felt too little too late, especially considering they had him monologueing for 5 minutes on two different occasions. We got it when he told Jack off, we didn’t need him to repeat the same speech after the commercial break. We knew Tony wouldn’t get his revenge, because he kept on and on, at that point it made the entire season feel pretty empty.

One of the main themes of the season – whether it was ok to Torture people was completely wasted because at every single point in the season where there was a clear choice between what is right and what is easy, they took the “easy – let’s string em up” path – even when it wasn’t even “necessary,” they did it. If the writers and producers really cared about this debate then they would have had at least ONE instance where they didn’t wind up beating information out of someone. Then it would have been interesting to see what the result of that action would have been.  I don’t know why Janeane Garofalo was even in this, yeah she was supposed to be the voice of “reason,” but she never forcefully presented the anti-torture argument.

What made this season work was Annie Wersching’s conflicted FBI Agent, Renee “Freckles/Rack Bauer” Walker was fantastic as the person who brought Jack onto the case in the first place, but then had to control him. You could see how conflicted she was as she watched Jack do his thing and felt for her as she slowly (well, pretty quickly) sunk down to his level. She eventually looked to Jack to be her mentor instead of her boss, FBI Director Larry Moss.  The dynamic between those three were fantastic.  But again the season finale left me feeling really let down and meh, like somehow I wasted the last 22 weeks watching this.  Keep in mind that they shut down production to completely rewrite the last 6 episodes which ended up being the worst of the year. I’m really curious to see what the original plan was now, that we know what they eventually came up with.  Even with a bad finale, the first 18 hours were thoroughly entertaining so I’m going to forgive the turgetness of the end.