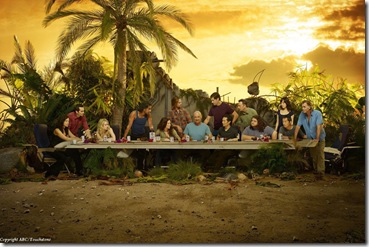 After ten-and-a-half months, Lost returned with its final season premiere, a two-hour premiere called LA X, last night. The final Lost recap, in a stroke of genius, was narrated by Michael [Ben Linus] Emerson and tracked the individual character arcs of the main cast members – an approach that was unique for these things – and set the tone for a most unusual beginning to Lost’s end. I have no idea how many theories were rendered invalid last night, or how many fans were thrilled or ticked off, but no can say the answers didn’t begin with a couple of big bangs!

BAM! Jughead worked – twice! Not only did we find our Losties safely aboard an Oceanic Flight 815 that negotiated some turbulence [with subtle changes]; we also got our Losties on the island in the aftermath of the explosion! Say what, now?

Damon Lindelof and Carlton Cuse have shown themselves to be capable of even more weirdness than we might have expected – even given the previous five seasons of Lost! Season six is following two alternate paths for the passengers of Flight 815. I did not see that coming!

While it is evident that the uninterrupted Flight 815 is different, those differences are both subtle and obvious. In the series premiere, for example, Rose [L. Scott Caldwell] is the jittery flier and Jack [Matthew Fox] is the calm one – now, Jack is the jittery one and Rose is calm. Subtle. Hurley’s [Jorge Garcia] claim of being “the luckiest man in the world” is also a significant reversal – though a lot less subtle.

What’s not so subtle is the near death by swallowing a baggie of drugs by Charlie Pace [Dominic Monaghan] – though Jack’s brief visit to the washroom has him looking into the mirror quizzically as if he intuits that something is not right.

Back on the island, in the flattened construction site for The Swan Station, the damage looks to be either something that happened in the past, or curiously radiation-free, later that same day. I wonder which it is…

At least, I wonder until we find Ben and John Not Locke [Terry O’Quinn] in the room where Jacob has, apparently burned to ash. So, a few hours later, then… And here we come to the first BIG answer. When Jacob’s followers enter, Not Locke disappears around a corner and Smokey appears – and kills them all, while Ben hides as best he can.

Then, John pops back up and says, “I’m sorry you had to see me like that.”

Smokey is The Man in Black [currently in the guise of Locke]. 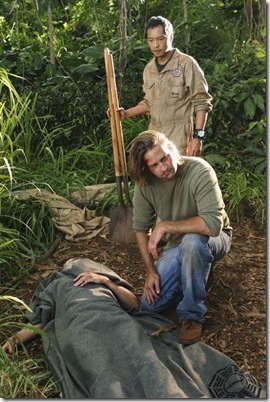 Lots of other big stuff happens, in both alternate timelines, but when we learn about Smokey right out of the gate, the discovery of another temple inside what we’ve assumed was a temple wall isn’t that big a deal – though what happens there, later, is. Even the matter of Juliet’s last words and where they come from – as well as Hugo’s last conversation with Jacob [Mark Pellagrino] – don’t have quite the same impact!

This, however, is not a recap. This is a review.

Did LA X live up to the levels of anticipation that had been building since season five’s finale? I think it did.

From the “previously on Lost” to the apparent resurrection of Sayid [Naveen Andrews], this two-hour episode was a ride! Without sacrificing any of its frenetic pacing on the island – and its more deliberate pacing in the world of the completed Flight 815 – Lindelof and Cuse combine thrills, great character arcs and genuine drama.

The idea to have the detonation of Jughead both reboot the series from the beginning and carry on from where it left is genius – especially since it doesn’t look like everyone would have been better off if the flight hadn’t crashed [even though those characters aren’t exactly the ones we saw on the original Flight 815]. The answers keep coming [we know why there was ash around Jacob’s cabin, for example and how Young Ben was healed] and the stakes keep getting higher in both timelines – see: Kate [Evangeline Lilly escaping in a cab that already had a customer – Claire [Emilie de Ravin]!.

Jack Bender, Lost’s number one director, does a marvelous job of balancing the two timelines – and making it clear that they aren’t just another storytelling device: they are revealing different sides of the same characters, that have been grown into under different circumstances [hence nervous flyer Jack, for example]. He gives every scene the precise weight it deserves – and since LA X is one of the biggest series of revelations since the series premiered, this is not an inconsiderable feat.

The thing I loved most about LA X is that for all the answers and revelations, I’m not any less confused, but [like Emilie de Ravin said in a recent interview] in a good way. For several hours, my mind has been buzzing from watching LA X – and I’ll be watching it again, shortly. If I had had any doubt that the series might slip off the rails, that doubt is gone.