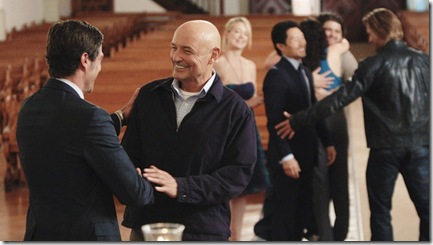 The world of the flash-sideways is filled with joys large and small: Charlie [Dominic Monaghan] recognizing Claire [Emilie de Ravin] from the stage at the benefit concert; Kate [Evangeline Lilly] helping Claire have her baby backstage; Sayid [Naveen Andrews] encountering Shannon [Maggie Grace]; Sawyer’s [Josh Holloway] encounter with Juliet [Elizabeth Mitchell] in front of the hospital vending machine; Eloise [Fionnula Flanagan] pleading with Desmond [Henry Ian Cusick] to not take her son. Then there’s the realization, when Sun [Yunjin Kim] and Jin [Daniel Dae Kim] speak English in the hospital, that they remember everything – and by extension, everyone Desmond has helped remember must, therefore also remember everything – which explains how Hurley [Jorge Garcia] knows that Ana Lucia [Michelle Rodriguez] wasn’t ready, in last week’s ep, and how he can so confidently say that he knows all about Sayid. 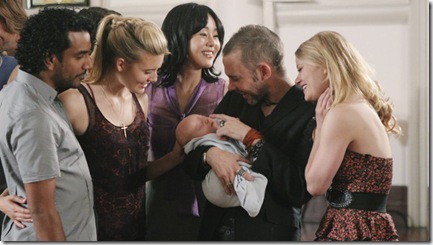 Then there’s the poignancy of Ben [Michael Emerson] sitting outside the church instead of entering, because he needs to work on some stuff – and the exchanges between him and Locke and him and Hugo.

All of which lead up to Christian Shepard’s [John Terry] exchange with his son, beside an empty coffin.

On the island, everything that has happened over the show’s run is distilled into Jack [Matthew fox] versus NotLocke [Terry O’Quinn]. Jack and Hugo and NotLocke and Ben take Desmond to the heart of the island. NotLocke to destroy the island; Jack to destroy ol’ Smokey. The result is not what either expected.

The final battle between the thing in Locke’s body and Jack is the culmination of the series: good vs. Evil in its most basic form – one on one. Smokey’s knife deals Jack a mortal wind, but Jack fights on. Then, out of seeming nowhere, a shot rings out!

Kate has saved a bullet for our villain – but the wound hasn’t killed him. Smokey/Locke only dies when Jack kicks off the cliff.

On the island, the game is over. A rescued Lapidus [Jeff Fahey], assisted by Miles [Ken Leung] and Richard [Nestor Carbonell] jury-rigs the Ajira jet to get the survivors off the island.

Jack climbs into the well to fix the island [that Jack, always fixing something] and finally staggers to the same spot where he first woke up on the island and collapses. As he lies there gazing into the sky, Vincent comes out of the jungle and lies down beside him. He sees the Ajira plane fly over and, with a close-up shot that mirrors the first show of the series, his eye closes. 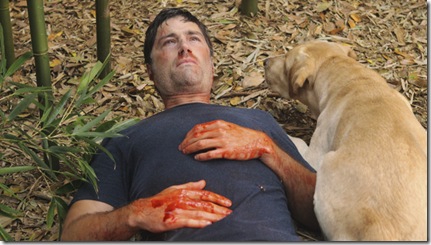 As someone who occasionally got bogged down in the details – for that’s what the mythology was: details – I found myself thoroughly enjoying the finale… possibly even more than I expected. I didn’t care what the mysterious light at the heart of the island was. Not really. I didn’t even care about mysteries that surrounded the temple and Dogen and all of his fellow Others – or any of a dozen other mysteries.

Explaining all those other mysteries would have taken away from the characters and what they achieved over the show’s six seasons – a community. As Christian Shepard put it as he talked about the place in which the characters found themselves in the finale’s epilogue, no one got to that point on their own. They needed each other; they needed that community that they built on the island.

On the island, they were the best they’d ever be – and even if some lived long past Jack’s death, they all created a place for themselves that required them to come together before moving on. Not as a task, but as a desire – they’d become a family and would move on as such. That is the real meaning of Lost. 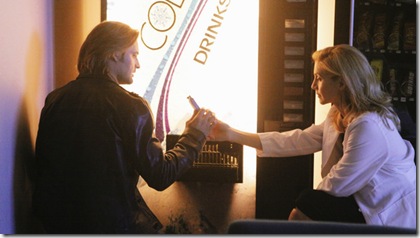 Bernard and Rose, still together; still opting out of all the drama.

Ben saving Hugo from the falling tree even though it meant he got trapped beneath it.

The logical result of Smokey telling Kate to save her bullets.

Eloise being a mother – and nothing else.

Vincent staying with Jack at the end.

Seeing Desmond and Penny together in the church.

Seeing Jin and Sun happy, in the hospital.

The idea of Jack and Juliet having been married and having a teenaged son.

Kate and Sawyer jumping off the cliff to get to the boat.

Jack and his father telling each other, I love you.

Hurley and Ben, protectors of the island.

One thought on “TELEVISION: Lost: It’s Really Over! Ruminations on The End!”