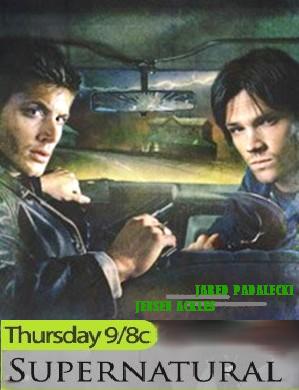 Viewers like myself and fans of the hit CW series Supernatural, which stars Jared Padalecki and Jensen Ackles as Sam and Dean Winchester brothers who hunt down demons and are currently trying to save the world from the apocalypse, were buzzing about an article from the online site Cinemaspy stating that a season 6 of the series had been confirmed as a go.

Of course we here at EclipseMagazine were as excited about this possibility as we are sure many of our readers are. However, we also know it is always good to check with official sources to confirm any information so I contacted the two publicists for Supernatural – Holly Ollis of the WB and Suzanne Gomez of The CW Network. As it turns out, the gun has been jumped regarding any confirmation that Supernatural has been renewed for a 6th season.

Both publicists for Supernatural have responded to the effect that any information going around about confirmation of a season 6 is based purely on speculation at this point. Gomez of the CW Network stated that at this point no “CW shows have been renewed” and that any decisions of this nature will not be made until May. That means that confirmation of renewal for Smallville is also based solely on speculation.

So there you have it, Supernatural has yet to be renewed for 6th season and so all of us whom are viewers of Supernatural and those who are fans of the series as well are once more left to wait in anticipation of news that the series will continue for another season.

Meanwhile season 5 is still running strong  and has just returned with all new episodes Supernatural is also fast approaching its 100th episode so tune into the CW Network on Thursday nights at 9PM EST to catch up with Sam and Dean Winchester in their race against time to stop the end of days. Next up is S5.12 Being Sam Winchester ..aka Swap Meet.