Cold Case [CBS, 9/8C] deals with a team of detectives that solve “cold” cases – cases that that have long since been given up on – usually because some pertinent information has floated to the surface, figuratively speaking. The one thing they are completely unprepared for is a case that involves the here and now – and when the victim is one of their own, they find themselves in a place they’ve never been. 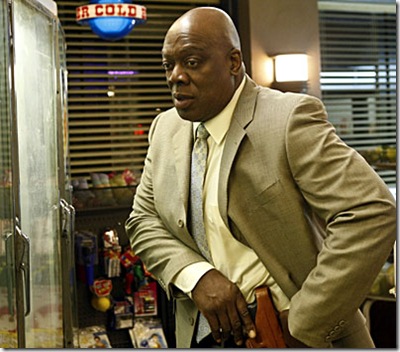 In Officer Down, Will Jeffries [Thom Barry] and Nick Vera [Jeremy Ratchford] stop so that Will can pick up some milk. When Will enters the corner store and goes to the milk cooler, he is shot from behind and left to die, along with the store owner, a neighborhood mainstay whom everyone calls “Pops”. From there, the episode deals with the reactions of the rest of the team – Lilly Rush [Kathryn Morris], Scotty Valens [Danny Pino], Lt. John Stillman [John Finn], and Kat Miller [Tracie Thoms].

They find themselves not only having to work in the present, but also trying to find who ambushed one of their own. From their initial responses [Rush gets the call as she’s jogging and pulls up short; Valens was in a dare with a gorgeous young thing and just drops her off near her home and pulls away even as she’s asking if “we can do this again?”], to their intensity in working the investigation, we’ve never seen the team as focused – or as frustrated.

Thanks to a solid script from co-producer Charles Silber, we actually get to see new shadings of these characters [who would’ve thought that the sceptical Vera would find himself “getting good at prayer?”]. We get the show’s trademark flashbacks, but with one exception they’re only back a matter of days – but director keeps show’s unique look for them, which gives them more impact than usual. In fact, it’s through the flashbacks that we get to know Pops [Clarence Williams III] – something that both keeps us firmly grounded in the here and now, and shows us something we didn’t know about Jeffries.

There’s even an internal affairs investigation that doesn’t feel gratuitous – and Lt. Stillman learns who has it in for him. And yet, “officer Down” doesn’t feel rushed or cramped. It may be Cold Case’s best episode of the season [and there have been some really good ones].