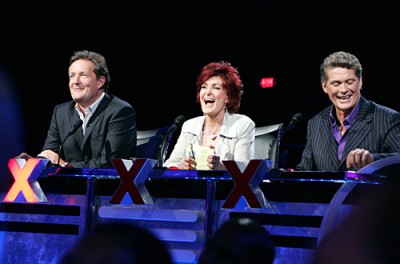 I’m proud of the fact that I haven’t watched a single second or wasted a single byte of digital data on this show. But I feel compelled to let you know that the folks at America’s Got Talent is going to have a big season finale this Wednesday night. The season finale of NBC’s hit summer series “America’s Got Talent” Wednesday, September 16 (8-10 p.m. ET) will feature special performances from Latin pop star Shakira, British singing sensation Leona Lewis, country music superstars Rascal Flatts, the world-renowned Cirque du Soleil and many more special guests to be announced.  Previously announced finale performer, Susan Boyle will debut her new song “Wild Horses.” At the conclusion of the finale, the winning act to take home the million-dollar prize and a headlining show in Las Vegas will be announced.   Shakira will perform the world premiere of her mega-hit single, “She Wolf” from her forthcoming album of the same name, Leona Lewis will world premiere her song “Happy,” Rascal Flatts will be singing their latest hit “Summer Nights” and Cirque du Soleil will present a sneak peek performance from their brand new theatrical production “Banana Shpeel.”  Ummm…. The name of the show is AMERICA’S Got Talent. Not WORLD or Britain’s Got Talent. Where’s the AMERICAN talent?  This is pretty lame. But I do love Cirque and I kind of like Leona Lewis, don’t know anything else about these other people.

5 thoughts on “Television: America’s Got Talent not featuring AMERICAN Stars for Finale”